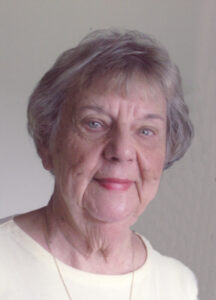 Loraine E. Wojcik, 84, a resident of Donaldson for the past 30 years, passed away Monday, October 1, 2012 at 6:30 a.m. in Kindred Hospital, Mishawaka, following an illness.
Loraine was an only child, born in Chicago on September 28, 1928, the daughter of Edward and Lottie (Wierzchowska) Myszka. She attended Chicago schools.
In July of 1949 she became the bride of Stanley L. Wojcik in Chicago, IL. Over the next 63 years they did everything together; raising their son, building their home, attending church and so it was with great sorrow that Stan left her side just over two weeks ago and preceded her in death on September 13th . Their son Ed and his wife Peggy Wojcik of Orland Park, IL, survive with two grandchildren; James M. Wojcik of Orland Park and Michele (John) Quintas of Batavia, IL. A great-granddaughter, Juliette Mae Wojcik also survives.
She was a member of St. Michael Catholic Church in Plymouth.
Loraine was a homemaker who had for many years taught sewing at the Sears & Roebuck store in Calumet City, IL. She was also an accomplished artist and enjoyed working with all types of media.
Visitation will be held on Wednesday, October 3rd from 5 – 7 p.m. in the Johnson-Danielson Funeral Home, 1100 N. Michigan St. in Plymouth. A Rosary will be prayed at 7 p.m. in the funeral home.
A Mass of Christian Burial will take place at 11 a.m. on Thursday, October 4th in St. Michael Catholic Church, 613 N. Center Street, Plymouth. The Rev. Fr. William Kummer will officiate. Memorial gifts may be given to the church.