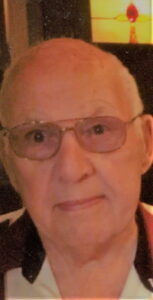 Loren G. Voreis, 91, passed away on Saturday, July 4, 2020 at his home surrounded by his family.
He was born July 2, 1929 in Plymouth, Indiana to William Burford and Delphia M. (Reed) Voreis. He graduated from Culver High School with the class of 1948. After graduating he enlisted in the Indiana Army National Guard serving from 1951-1954 under the command of the 293rd Infantry Battalion, 38th Division Echo Company and was an expert marksman. After being honorably discharged as a Sergeant, he married Bonnie L. (Vanata) Voreis on January 16, 1954 in Argos.
Loren worked for Easy Heat Wire Craft in Lakeville in 1961 for eleven years. In 1972, he was the start up and plant manager for Ristance Products in Argos for fourteen years before starting Filko Cobra in 1988 where he was the plant manager for eight years. Loren also worked for Publix Grocery Store in Bradenton Florida in the seafood department where he received employee of the month twice for his customer service.
Loren enjoyed hunting, fishing and boating. He was very mechanical and loved repairing anything from electrical to mechanical. Loren also enjoyed a good euchre game where he was a very fierce competitor. Loren is survived by his children: Mark W. Voreis of Culver, IN, Luann Brewer of Plymouth, IN and Lorna Leamon of Culver, IN; granddaughters: Heather Brewer of Hanna, IN, Shanna and Shaya Leamon of Milwaukee, WI; sister-in law’s, Joyce (Pat) Thomas of Etna Green, IN and Elizabeth Voreis of Montgomery, AL. Also surviving is his companion of twenty-one years, JoAnn Redman of Bourbon, IN.
He is preceded in death by his parents; spouse Bonnie Voreis, brother Roger Voreis and sister-in-law Shirley Thayer-Watrous. Visitation with the family will be held on Thursday, July 9, 2020 from 5 p.m. to 8 p.m. at the Johnson-Danielson Funeral Home, 1100 N. Michigan St, Plymouth.
Funeral services will be held on Friday, July 10, 2020 at 11 a.m. at the Johnson-Danielson Funeral Home with Life Celebrant James Smart officiating. Visitation will resume one-hour prior.
Burial will be in the Culver Masonic Cemetery, Culver. Memorial contributions may be given by the choice of the donor.