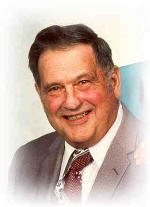 Loren Milo Dinkledine, 83, a fifty year resident of 4441 Michigan Rd. Plymouth , died following an extended illness, Wednesday at 10:35 p.m. in the St. Joseph Regional Medical Center , Plymouth . Born in Bourbon, Ind. , on March 13, 1919 , Loren was the son of Milo and Lilia Freeman Dinkledine. In 1937 he graduated from Bourbon High School . Loren was an area resident most of his lifetime, yet lived in Hammond , Ind. from 1939-1949. It was there Loren would play semi-pro basketball for the Hammond Celtics.
On May 24, 1941 , in Tyner, Ind. Loren took as his bride for the next 61 years, Mildred G. Logan, who survives. Always together, they were involved in both their children and grandchildren’s many activities.
Loren made his living as a brick/stone mason and owned and operated Dinkledine Masonry Construction Co. of Plymouth from 1950 – 1987. He was a former Trustee at the Trinity United Methodist Church . Loren loved all sports, especially fishing and hunting, having experienced numerous trips to Michigan , Colorado and throughout the Mid-west. Much of Loren’s past-time kept him close to home, as he had a passion for maintaining the nearby Fairmont Cemetery grounds for over 30 years.
Survivors include his wife Mildred along with two daughters; Leila Emmons and Lorna (Ernest) Zartman all of Plymouth . Six grandchildren; Dennis (Joan) Emmons Jr.of Plymouth, Doug (Suann) Emmons serving in the U.S. Army, Korea; Debbie (Tracy) Rippy of Plymouth, Michael (Kristine) Zartman of Plymouth, Daryl (Beth) Zartman of Kalamazoo, Mich. and Lana (William) Hostrawser of Plymouth. Fourteen great grandchildren also survive along with one brother Dale (Betty) Dinkledine of Florida; two step-sisters, Waneta Klinefelter of Etna Green , Ind. , Phyllis Stackhouse of Westfield, Ind. and a step-brother, John Houser of Brownsburg, Ind.
He was preceded in death by his parents, three brothers; Hershel, Bill and Lewis Dinkledine and one step-brother Lloyd Houser.
Visitation will be held on Tuesday, Sept. 3rd from 5 – 8 p.m. in the Johnson-Danielson Funeral Home, 1100 N. Michigan St. Plymouth , where services will take place at 10 a.m. Wednesday. Burial will follow in the Fairmont Cemetery , Plymouth .
Memorial gifts in Loren’s memory may be made to the St. Michael’s School, Fairmont Cemetery Care Fund or Donor’s Choice.