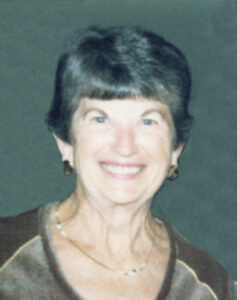 Loretta C. Shuppert, 90, a Plymouth resident since 1957, died at 3:10 a.m. on Thursday, January 7, 2016 at Miller’s Merry Manor in Plymouth, after a lengthy illness. As one of the longest residents at Miller’s, she was well known by everyone. A special thanks to the Alzheimer Unit and Orchard Wing staff members who did so much to help Loretta through her long journey there.
The daughter of Pete and Clementine M. (DeSutter) DeBruicker, Loretta was born in Attica, Indiana on October 22, 1925. Loretta grew up on several small farms in the rural area of Attica. The DeBruickers and DeSutters were immigrants from Amsterdam, Holland and became hard working tenant farmers. Loretta graduated from Attica High School, the home of the Red Ramblers with the class of 1943.
Loretta married the love of her life, Don Shuppert on February 1, 1947, at the St. Frances Xavier Church in Attica, Indiana. Don and Loretta were a devoted couple and spent 53 wonderful years together before Don preceded her in death in June of 2000. They were seldom seen apart. They enjoyed splitting retirement between Pretty Lake in Plymouth, Indiana and Sarasota, Florida.
Travel goals were met as they explored all 50 States and Canada. The Shuppert’s made several trips to Europe and also visited Thailand to reunite with their AFS ‘adopted’ son, Sahus ‘Hod’ Hansin. These trips always included agricultural locations of interest in keeping with the farming roots of the family. (Don was the Plymouth High School Agriculture instructor for 25 years.)
The work ethic of her parents was not lost on Loretta. Her devotion to her family and dedication to homemaking, as well as her volunteer efforts, were evidence of that.
Unless reading, she seldom sat still. After moving to Plymouth, Loretta became involved in; Plymouth Welcome Wagon, St. Michael’s Altar Rosary Society, Tri Kappa, Parkview Hospital Pink Ladies (also in Florida) Adult Farmers Association, American Cancer Society and was past president of the Triton Teachers Association.
She would walk for several miles every day (what she loved most about golf) and she and Don kept a large scoreboard in their garage, noting the running total of golf balls they found on their route around Pretty Lake and the Plymouth Country Club golf course.
Loretta was always the one to mow the yard after laundry work on Mondays. Geese poop on the lawn was a constant aggravation. She provided no small amount of entertainment as neighbors watched her chase geese off of her property. Her proudest achievement was excelling at Ancilla College and IUSB, completing her teaching degree. Loretta and her son Dan were college freshmen the same year. She went on to teach 5th grade students at Triton Elementary School for eleven years. A box of thank you cards and notes from students were recently discovered in her closet.She had previously worked as a secretary for 8 years at Biggs Pump & Supply in Lafayette.
Loretta is survived by a son Dan and wife Vera (Tiani) Shuppert of Plymouth; Grandson Kane and wife Peggy (Rickman) Shuppert: children Kaneda and Quinn; Grandaughter Kristen and husband Don Lawless and children: Justin, Cory, Kyle and Derek Ross.
She was preceded in death by her parents, her husband, Don; two brothers: Vincent and Gene DeBruicker; two sisters: Elizabeth and Ann Marie and in-laws Sophia (Lucy) and Clarence Shuppert.
Friends may call on Monday, January 11th from 4 – 7 p.m. in the Johnson-Danielson Funeral Home, 1100 N. Michigan St., Plymouth. A Tri Kappa Memorial Rite will begin at 7 p.m. followed by a eulogy by her son Dan and a time of sharing.
A Mass of Christian Burial will begin at 11 a.m. Tuesday, January 12th in the St. Michael Catholic Church, 613 N. Center St., Plymouth where visitation will continue after 10 a.m. until time of service. Fr. James J. Ferguson CSC will officiate.
Burial will follow in the New Oakhill Cemetery, Plymouth.
Memorial gifts may be made to the PHJC Moontree Studio located at The Center at Donaldson, P.O. Box 1, Donaldson, IN 46513. or 4H Programs – Marshall County, 112 W. Jefferson St. Plymouth, IN 46563.