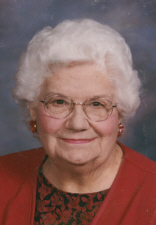 Lorraine Jackson Balka, 90, a longtime resident of 6699 N. Michigan Road, died of natural causes at 11:50 p.m. Tuesday, November 15, 2005 in the Miller’s Merry Manor, Plymouth.
Born in Morocco, Indiana on March 9, 1915, she is the daughter of Miles I. and Fannie E. (Don) Jackson. Lorraine received her education in South Bend graduating with the Central High School Class of 1933.
On September 30, 1939 in South Bend she became the bride of Alex K. Balka. Together in 1947 they moved to Plymouth and opened the Electrik Maid Bakery which they operated until 1963.
Lorraine then returned to work at Auto-Owners Insurance Company in South Bend, where she had been employed earlier. She retired with over 40 years at the company.
She was a member of the First United Methodist Church, Plymouth; Zeta Zeta Chapter of Delta Theta Tau Sorority, where she had been a member over 60 years in South Bend and Plymouth. She also served as a past national officer. As a 50 year member of the Plymouth Chapter of the Order of the Eastern Star, she served as Worthy Matron on multiple occasions. Lorraine also had served as President for the Women of the Elks, South Bend and as Chair of several American Cancer Society fund drives for Marshall County.
Always active, she enjoyed being involved with the South Bend Shoe and Slipper Dance Club many years.
Survivors include her son, Dr. Don S. and wife Sharon Balka of LaPaz; a grandson, Lt. Cdr. Stephen Dale Balka (USN) and his recent bride Lt. Dr. Amy Balka (USN) of the Naval Air Station in Jacksonville, Florida and granddaughter Paige Lynn Balka of Indianapolis. A brother-in-law Stanley Magan of Hartford, Kentucky also survives with several nieces and nephews.
Lorraine was preceded in death by her parents, her husband Alex who died May 29, 1983, two sisters: Winona Jackson and Juanita Magan and a brother Don Jackson.
Friends are invited to join the family on Friday, November 18, 2005 from 5 – 8 pm in the Johnson-Danielson Funeral Home, 1100 N. Michigan St. Plymouth. Members of Delta Theta Tau Sorority will honor Lorraine with a memorial ritual service at 7:30 p.m. Friday in the funeral home. On Saturday, November 19, 2005 services will begin at 10 a.m. with an Eastern Star memorial rite in the funeral home, the funeral will immediately followby under the direction of Rev. Dr. Dean Fager, pastor of the First United Methodist Church. Burial will be in the Riverview Cemetery, South Bend.
Memorial gifts in Lorraine’s name may be made to the First United Methodist Church, Plymouth or the Marshall County Community Foundation, P.O. Box 716, Plymouth, IN 46563.