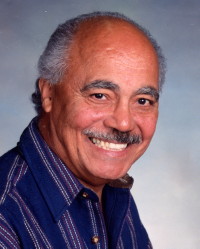 Louis A. Morales, 83, passed away in his home on Christmas Day December 25, 2018.
Born in Ponce, Puerto Rico on December 28, 1934, Louis was the son of Luis Antonio Morales Lugo and Carmen Colon Morales.
He received his Associates Degree in Liberal Arts from Valley College and then attended the University of California for four more years, in San Bernardino, California.
He enlisted in the U.S. Air Force on August 27, 1952 when he was 16 years old. He served during the Korean Conflict and was Honorably Discharged after 26 years of service to our country. While in the military, he traveled the world with the USAF Fast Pitch Softball Team as a pitcher. Lou was able to go on an Honor Flight in September 2017, for which he was very grateful.
Louisâ€™ military career took him many places and to many countries from 1955-1978. He lastly settled in Plymouth in 2003. On January 17, 2003, Louis married Tina Kaser.
He was a member of the First United Church of Christ in Plymouth. He was also active in the Board of Directors for Heart and Hand, the Officers and Noncommissioned Officers Club USAF, he volunteered at the Marshall County Historical Museum as a tour guide and in genealogy, and was a CASA volunteer. He was a member of the Disabled American Veterans Chapter 42, and served as the adjutant. He supported the dog park in Plymouth.
Louis is survived by his loving wife, Tina of Plymouth and his sons: Angel (Paula) Lluveras of Tallahassee, FL, Ken W. (Pat Ruhnke-Morales) Morales of Arlington, TX, Ray E. (Selma) Morales of San Antonio, TX, Michael W. (Laura) Morales of San Antonio, TX, , Robert A. (Karen) Morales of San Antonio, TX and; several grandchildren and great-grandchildren; step-children: Jessica Westfall of Plymouth and Bryce Westfall of West Lafayette; and sister, Carmen Rodrigues of New York.
He was preceded in death by his parents, step-father Fausto Lluveras, sister Maria Luisa Roman, and brother Efrain Morales.
Visitation will be held on Saturday December 29, 2018 from 10 a.m.-12 p.m. (noon) in the First United Church of Christ, 321 N. Center Street, Plymouth. Funeral services will follow at noon in the church with Rev. Marie Siroky officiating.
Burial will be in the New Oak Hill Cemetery, Plymouth.
Memorial contributions can be made to the First United Church of Christ, 321 N. Center Street, Plymouth, 46563.