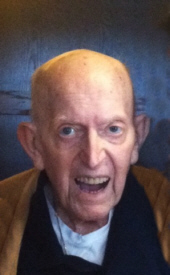 Louis J. Christy Jr., 88, formerly of Lagrange, Illinois, passed away with his daughter Patricia Lenne near, at 7:40 a.m. on Saturday November 28, 2015 in Miller’s Merry Manor, Plymouth.
Louis was born the son of Louis J. Sr. and Beatrice (Wheat) Christy on March 12, 1927 in Chicago, Illinois. He graduated from Foreman High School and attended one year of college before joining the military.
He served our country during WWII in the U.S. Army and was Honorably Discharged as a Corporal on November 15, 1946.
In Terre Haute, Indiana on April 11, 1953, Louis took as his bride Rita O’Connell. The couple lived in Lagrange, Illinois for 56 years. She would precede him in death in July of 1994.
Louis worked for Montgomery Wards in visual merchandise for 37 years before his retirement in 1983.
He is survived by his daughter, Patricia C. (Tony) Lenne of Plymouth, and his grandchildren: Ashley, Danielle and Kaitlyn Lenne, all of Plymouth.
Louis was preceded in death by his wife, parents and sister, Eileen Bilotti.
Visitation will be held from 10 – 11 a.m. EDT on Wednesday December 2, 2015 in the St. Michael Catholic Church, 612 N. Center Street, Plymouth. Mass of Christian Burial will be held at 11:00 a.m. in the church with Fr. John Korcsmar C.S.C. officiating. Military Honors will follow outside the church, provided by members of the American Legion Post 27, Veterans of Foreign Wars- Marshall County Post 1162 and D.A.V.
Family burial will be in the Calvary Cemetery in Terre Haute, Indiana.
Memorial contributions can be made to Ounce of Prevention Foundation P.O. Box 459, Plymouth, IN 46563.