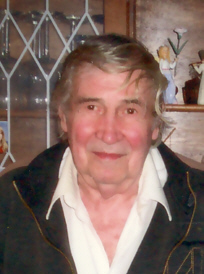 Former Marshall County resident, Louis John Petty, 82, died unexpectedly at his Ft. Wayne residence on Friday, January 15, 2010 at 7:45 pm. John formerly of LaPaz, has resided in Ft. Wayne for over 40 years.
John was born in LaPaz on November 22, 1927, the son of George W. and Viola Mae (Mummey) Petty. He attended LaPaz schools and then worked with his father for the B&O Railroad at an early age. Following the death of his parents he was raised by his grandparents; John and Martha Mummey. There he also attended the LaPaz Church of God.
On February 1st, 1946 he joined the Army and served in the Philippines – Pacific Theater during WWII.
Following the war he took a job with Heat Treat in South Bend and later transferred to Ft. Wayne.
John enjoyed the company of his pet cats, following baseball and could easily argue politics.
He was a life member of the Plymouth VFW Post 1162 and the Bourbon American Legion Post 424.
Survivors include his sister; Betty J. and Leo Robert Bocko Sr. of Bourbon along with nieces; Jane A. Hartung, Linda M. (Sherman) Stevens of Bourbon, Patricia K. (Richard) McGriff of Wurika, OK and Carol A. (Gary) Buday of Stigler, OK and nephews; Leo K. (Donna) Bocko of Bourbon, James A. (Christine) Bocko of Wyatt, IN and Robert L. (Krista) Bocko of Noblesville, IN. Many other nieces and nephews and great nieces and nephews also survive.
Friends may call on Thursday, January 21, 2010 from 11 a.m. to Noon in the Johnson-Danielson Funeral Home, 1100 N. Michigan St., Plymouth where services will be conducted at Noon under the direction of Rev. Mark Day, pastor of the Bourbon First United Methodist Church.
Burial will follow in the Fair Cemetery, North Liberty, Indiana with military graveside honors.
Memorial gifts may be made to the First United Methodist Church, 204 N. Washington St., Bourbon, IN 46504.