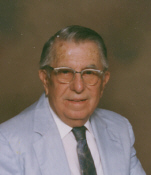 Lowell A. Moore’s main goal in life was to honor and glorify God the Father; Jesus Christ our Savior; and the Holy Spirit. What a joyful time to have bestowed the rewards for a life so well lived and reunite with the love of his life, Maurene.
Lowell passed in the early morning hours of Friday, December 23, 2005 at his home in the Miller’s Assisted Living Facility – Plymouth.
He was born April 1st. 1909 to Eldon T. and Lillian (Rhoades) Moore at New Albany, Indiana. His parents moved to Jonesboro, Indiana in 1911 when he was six years old, where Lowell attended a one room school house. After the death of Lowell’s father in 1917, the family of five boys and one girl moved with their mother to Anderson, Indiana.
In 1922, during a recession, the mother and children lived with their mother’s parents on a farm at Altamont, Ill. for two years where he worked as a farmhand for his grandfather. The family would then return to Anderson where Lowell graduated from High School in 1927.
In 1928 while attending a small church in Anderson, Lowell met his future bride, Maurene Sanders, who he courted throughout college. They were married in that same church on March 29, 1934 and enjoyed 71 wonderful years together. She died on July the 9th of this year.
Following high school, Lowell worked for three years to attain enough money to enroll at the University of Cincinnati. He continued to work his way through a five year course in applied arts. Besides taking academic courses, he took courses in architecture, landscape architecture, engineering and design and received a B.A. degree in Landscape Architecture in 1935.
Lowell worked as a landscape architect and salesman from 1935 – 1942 in Springfield, Ohio and Lexington, Kentucky. During the war he served as a tool designer at the Delco Remy plant in Anderson, Indiana. Following the war he was an assistant professor at Purdue University from 1947 – 1949, there he taught a course in landscape appreciation and as an extension landscape architect working with farmers in various counties, as well as rural churches, schools and parks.
Lowell moved his family to Plymouth in 1949 and worked as the landscape architect for the Price Nurseries until 1953 at which time he became associated with Young’s Landscape and Nursery in South Bend but continued to live in Plymouth. In 1960 he was able to go into business for himself as Moore’s Landscape Plan Service. He designed landscape plans for homes, churches, public buildings, hospitals and parks. He was most proud of the comprehensive design of the Price Memorial Park, including the dredging of the lake and construction of its many enhancing structures.
He was also called on to design the Plymouth Police station, several area homes and oversee the implementation of the Plymouth downtown re-vitalization project in the 1980’s. Lowell simply has never really retired and was involved in projects at the age of 93.
Lowell served the Lord daily and was an active member of the South Bend Community Baptist Church for the past eighteen years and has taken a strong stand on moral and Christian issues.
He is survived by three children: Ronald and Mimi Moore of Portage, Indiana, Jeaneen Snyder of Plymouth and R. Carol Skinner of Carmel, Indiana.
Five grandchildren and ten great-grandchildren also survive.
He was preceded in death by his parents, spouse, four brothers; Meredith, James, Richard and Charles Moore, as well as his sister Virginia Reed.
Friends will be welcomed by the family on Monday, December 26, 2005 from 4 to 7 p.m. in the Johnson-Danielson Funeral Home, 1100 N. Michigan St., Plymouth, Ind. Calling will continue at the church one hour prior to services.
Funeral services will take place in the Community Baptist Church, 5715 Miami Road, South Bend at 11 a.m. on Tuesday, December 27, 2005
Burial will follow in the New Oakhill Cemetery, Plymouth.
Memorial gifts may be made to the Community Baptist Church or the donor’s choice.