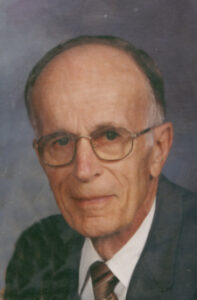 LOWELL JAMES COX
January 18, 1920-January 8, 2008 Plymouth – Lowell James Cox, 87, of 6689 Old US 31, died at 8:33 P.M. Tuesday January 8, 2008 at his residence of natural causes.
Lowell was born January 18, 1920 in Plymouth to Edgar J. and Lura G. Snyder Cox. He graduated from LaPaz high school with the class of 1938.
On November 3, 1946 in the First Presbyterian Church of Plymouth, Lowell took the beautiful Helen M. Meiser to be his wife.
Lowell was a proud First Sergeant of the United States Army and a member of the 11th Airborne. He was part of the 503rd regimental combat team that jumped on Corridor in the Philippines; he was also part of the occupying force of Japan that stayed after the war. After serving his country he worked as a tool and die maker with the South Bend Tool and Die Company.
He was a member of the First Presbyterian Church of Plymouth, the A.F. of L.C.I.O. Union, the Tool and Die Makers Lodge #1384, and he was a 32nd degree Mason.
Lowell adored his wife Helen, and his grandsons, he also enjoyed golf, not only playing it, but watching it on the television. He loved gardening and tractors.
He is survived by a son Barry (Trisha) Cox of Plymouth, a daughter Beth A. Cox of Monument, CO, three grandchildren, Kalum, Jordan, and Masen Cox, and one great grand daughter McKenzie all of Plymouth. Two brothers Wayne (Marjorie) Cox, of Bremen, and Dale (Betty) Cox, of Lakeville, survive as well.
Lowell was preceded in death by his wife, his parents, and a brother Paul Cox.
Friends are invited to share memories with Lowell’s family in the Johnson-Danielson funeral Home, 1100 N. Michigan Street, Plymouth on Wednesday January 16, 2008 from 5 p.m. to 8 p.m.
Funeral services conducted by Rev. Stephen Cox, Cornerstone Community Fellowship, LaPaz, will be held Thursday January 17, 2007 at 10 a.m. in the funeral home.
Interment will be held in Chapel Hill Cemetery, Osceola, Indiana at a later date.
Memorial contributions may be made to the charity of the donor’s choice.