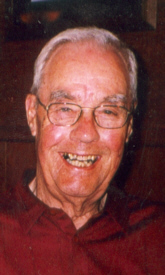 Longtime Plymouth businessman, Lowell R. Greenlee, 86, passed away Sunday morning, July 17, 2011 at 5:50 a.m. in the Bremen Health Care of natural causes. Lowell was an Olive Trail resident in Plymouth for the past 50 years.
He was born in Plymouth on February 26, 1925, the son of Robert E. and Rena M. (Lawrence) Greenlee.
Lowell graduated from West High School in 1943, there he was a standout 5’10” center on the basketball team which at the time had no indoor court. Later he would remain active from the mound playing fastpitch softball for the “Franklin Scrappers” and “Plymouth Merchants”.
After graduation, Lowell was off to the Great Lakes Naval Base and served on the USS Alnitah as a Radioman Second Class in the Pacific Theater during WWII.
After the war, Lowell attained a Business Degree from Indiana University. He then entered the field of insurance and later partnered with Fred Morrow from 1967 until his retirement in 1990 from the Morrow Insurance Agency in Plymouth.
On June 17, 1947 in Donaldson, Lowell took as his bride the former Ethel M. Bergman and together they have enjoyed 64 wonderful years. Ethel survives with their three sons and families. They are: Robert L. Greenlee of Plymouth and his daughter, Gina C. Greenlee. Phil F. and Yung J. Greenlee of Plymouth and children; Debra S. Lockhart and Doreen S. Ruggles. Larry K. Greenlee of Waterville, Ohio and children; Adam K. Greenlee, Drew W. Greenlee and Leah M. Rowe. Five great grandchildren include: Hadley, Asia, Breanne, Rebecca and Brandon.
Lowell was a great dad and always present and accounted for at his sons many activities. He also took great pride in maintaining his property on Olive Trail and enjoyed watching a good Chicago Bear game.
Lowell was raised in the Methodist faith and had then attended Trinity United Methodist.
In the community he has been involved with the American Legion Post 27, Veterans of Foreign Wars – Marshall Co. Post 1162, and the Eagles, Moose and Elks Lodges.
A family service will take place with burial in the New Oakhill Cemetery.
The family would request as a preferred form of memorial that contributions be made to the Wounded Warrior Project, P.O. Box 758516, Topeka, KS 66675-8516 or visit: www.woundedwarriorproject.org/