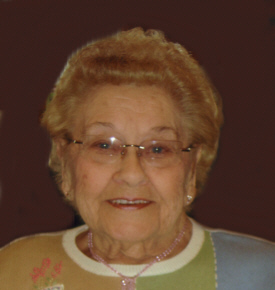 Lucile Irene Maxson, 95, a resident of River Park, Plymouth, passed away at 12:35 p.m. on Monday, July 4, 2011, in Miller’s Merry Manor, Plymouth.
Lucile was born in Kosciusko County on April 1, 1916. She was the daughter of Ray and Zelda Sumpter Thomas. She attended LaPaz High School.
On May 5, 1934, Lucile and Russell L. Maxson were married. Russell died in August of 1988. Lifetime Marshall County resident, she was a homemaker, and a farmer’s wife and for twelve years she drove a school bus.
She was a member of the Lakeview Homemakers Club, the Shiloh Wesleyan Church and the Helpful Hour Club.
Handy and talented with her hands, she used to make candles, pillows and beautiful quilts
She had a lovely collection of nice Cupie dolls
Lucile is survived by two daughters and a son. They are Joan Bammerlin, Inverness, Fla: Linda (David) Rash, LaPaz and Larry (Diana) Maxson, Lake of the Woods.
A sister Letha Flory of Nappanee also survives together with 7grandchildren, Steve (Becky) Bammerlin, Kevin (Nancy) Bammerlin, James (Judy) Bammerlin, Kimberly (Shane) Whitsel, Larry (Dawn) Maxson, Jr., William (Cindy) Rash and Sherri (Jeffrey) Stewart.
Lucile is also survived by 13 great grandchildren and 8 great great grandchildren.
She was preceded in death by a sister, Betty Hughes, a son-in-law, Richard Bammerlin and a great-granddaughter, Brooke Thompson.
Friends will be welcomed for visitation on Thursday, July 7, 2011, from 4 to 8 p.m. at the Johnson-Danielson Funeral Home, 1100 N. Michigan St., Plymouth. Funeral services for Lucile will be held on Friday, July 8, 2011, at 9:00 am at the Johnson – Danielson Funeral Home with Pastor Chuck Krieg officiating.
Burial will be in Oakhill Cemetery next to her beloved husband, Russell.
Memorial gifts in Lucile’s memory may be given to the Shiloh Wesleyan Church 10532 4B Road Plymouth, Indiana 46563 or the Charity of the Donor’s Choice.