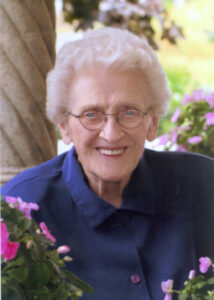 Lucile Marie Overmyer died at her home, 15034 State Road 17, Culver, at 10:45 p.m. on Monday, December 28, 2009, surrounded by her loving family. Lucile was 90-years-old.
She was born 100 miles from Marshall County in Raub, Indiana, on August 25, 1919, the daughter of Orville H. and Anna Matkin Perkins.
Lucile graduated from Raub High School with the class of 1938 and from the Memorial Hospital Nurses’ Training program shortly thereafter. She won her nurses’ cap and the heart of Glenn Overmyer after meeting him through his sister Mildred, a classmate at Memorial.
On March 28, 1942, she and Glenn were married in Plymouth. Glenn died on June 2, 2004.
During World War II, Lucile worked at the Kingsbury Ammunition Plant as a nurse, she later worked as a nurse at Parkview Hospital in Plymouth. She also did private duty care as a nurse all over Marshall County, her door was always open to anyone and everyone, students, family, and friends. Her helping hand was always available to anyone that needed it. Lucile last practiced nursing at the Culver Academy for 30 years, retiring in 1995.
She was a very active person all of her life. She helped in the garden, worked in the Hospital Auxiliary and loved to play any kind of cards –especially Pinochle. She enjoyed working puzzles and working in the thrift shop of the Wesley United Methodist Church, Culver.
She is survived by a large and loving family. She leaves two sons, both in Culver: Michael and Connie Overmyer and Kevin and Melodie Overmyer. Two daughters also survive, they are Patricia and James Watson, Decatur, Illinois and Nancy Overmyer, Indianapolis, Indiana.
Seven grandchildren and eight great-grandchildren also survive. They are: Sean and Sherry Overmyer with their children Hannah and Olivia, JB and Jean E. Overmyer and their children Ali, Brianna, and Luci, Heather Overmyer, Garth Overmyer, Matthew and Liz Watson and their daughter Erica, Adam Watson and Suzanne and Dan Barth and their children Hannah and Grace. Extended family member Carolyn Saft survives as well.
Lucile was preceded in death by her parents, her husband, Glenn and by a son, Gary Overmyer. Three brothers, Kenneth, Marvin and Donald Perkins and a sister, Winifred Perkins, also preceded her in death.
Visitation with the family will be from 10 a.m. to 1 p.m. on Saturday, January 2, 2010, at the Wesley United Methodist Church, 511 School Street, Culver.
A memorial service will be held in the church following visitation at 1 p.m. Pastor Larry Saunders will officiate.
Interment will be held at a later date in the Burr Oak Cemetery, Culver, Indiana.
In lieu of flowers memorial gifts in Lucile’s memory may be made to the Glenn and Lucile Overmyer Scholarship Fund c/o The Marshall County Community Foundation, The Center for Hospice and Palliative Care or The Wesley United Methodist Church Music Fund.