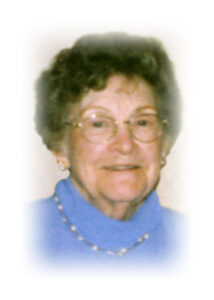 We understand the loss of someone you love, respect and hold in your memory. In recognition of our dear Mother’s 100th birthday. May she and all of the souls of the faithfully departed rest in peace. Amen Lucille O. Danielson, 96, a resident of River Park since 2007, passed away at her home Wednesday morning of natural causes. Lucille was born on November 24, 1915 in Kouts, Indiana, the sixth of thirteen children born to Ferdinand J. and Flora A. (Montgomery) Redelman.
Lucille graduated from Kouts High School in 1934. In 1935 she was caught by the eye of a young man from LaCrosse, Walter M. Danielson and the two were joined in the Sacrament of Holy Matrimony in St. Mary’s Catholic Church on June 27, 1936 and began a committed life for the next 70 years. During that time together they experienced life’s many challenges and rewards. After retirement the couple was able to enjoy traveling with their most memorable trip into Nova Scotia and Newfoundland. Walter preceded her in death on November 13, 2006.
Her career as a hairdresser began with her schooling in Gary, Indiana in 1937 after which she opened a shop in Kouts, started a family with son Robert in 1940 and then moved her shop to Valparaiso in the old bank building downtown. In 1948 the young family of three moved to Plymouth where she operated Lucille’s Beauty Shop in her home for the next 38 years and retired in 1986. She also held the position of hairdresser for Miller’s Merry Manor in Plymouth for many years, a service she dearly loved.
Lucille was a devoted member of St. Michael Roman Catholic Church, the Altar Rosary Society, Mary’s Group and daily devotions. She also enjoyed water aerobics, crocheting, playing all sorts of games, especially Scrabble and Dominos.
Her children are: Robert C. and Barbara Danielson of Plymouth and their children, Tim, Scott & Yunhan, and Stacy & Pat: Rodney P. Danielson of Brunswick, GA and his son, Rodney Michael: Darla S. and Evan Gast of Lakeville and their daughter, Lindsay: Reginald M. Danielson of Plymouth and his daughter, Brianne: Randall L. and Eleanor Danielson of Plymouth and their children, Olivia, Renee, and Mark: Roger A. and Cindy Danielson of Plymouth with children, Braxdon and Trevor. Five great-grandchildren also survive: Mitchell, Madison, Lily, Matthew, and Ian. One remaining brother Paul E. and Edna Redelman of Michigan City, and a daughter-in-law, Susan D. Danielson of Plymouth survives along with host of nieces and nephews and many dear friends.
Lucille was preceded in death by a grandson Matthew Thomas Danielson, four brothers: Ferdinand J. Jr., James M., Vincent L., and Edgar Redelman and seven sisters: F. Judy Fenimore, Lila Dutton, Beulah Laubner, Catherine ‘Violet’ Bailey, Ruth Jessen, Evelyn Hall and Rita Daumer and dear friend and caregiver Mirtha Guerrero.
Visitation for Lucille will be held from 2 – 6 p.m. on Sunday, November 25th in the Johnson-Danielson Funeral Home, 1100 N. Michigan St., Plymouth. A rosary will be prayed at 5:30 p.m. in the funeral home.
Mass of Christian Burial will take place at 11 a.m. on Monday, November 26th in St. Michael Catholic Church, 613 N. Center St., Plymouth. The Rev. Fr. William Kummer will officiate.
Memorial gifts may be given to St. Michael Parish – Tuition Assistance Fund, c/o Marshall County Community Foundation, 2701 N. Michigan St., Plymouth, IN 46563
A psalm of thanksgiving.
Shout joyfully to the LORD, all you lands;
serve the LORD with gladness;
come before him with joyful song.
Know that the LORD is God,
he made us, we belong to him,
we are his people, the flock he shepherds.
Enter his gates with thanksgiving,
his courts with praise.
Give thanks to him, bless his name;
good indeed is the LORD,
His mercy endures forever,
his faithfulness lasts through every generation.
Psalm 100