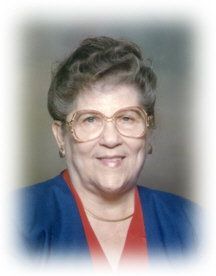 Lucille T. Giarraputo, 88, 1347 Crystal Ave, Naperville, Ill., formerly of Plymouth, died of natural causes at 5:29 a.m. on Sunday, November 8, 2009, in the Tabor Hills Heath Care facility. Lucille was born in Chicago, on January 22, 1921. She was the daughter of Daniel and Felicia (Massaro) Purciarello. She graduated from Chicago’s McKinley High School in 1939.
On June 7, 1941, in Chicago at the Holy Family Catholic Church, Lucille became the bride of Frank Giarraputo. Frank died on December 4, 1999.
A homemaker first, Lucille moved to the Plymouth/Donaldson area from Chicago in 1950. An expert in the marketing field, she worked for Divine Heart Seminary for 10 years, retiring in 1979.
She enjoyed the Chicago Cubs baseball games and loved the time she spent with her children and grandchildren.
A member of St. Michael’s Catholic Church and its’ Altar Rosary, she was active with Harvest House and was an associate of the Poor Handmaids of Jesus Christ and the Friendly 30 Club.
Lucille is survived by two daughters: Marianne F. (Robert) McKee of Boston, KY. and Sandra A. Pogorelec of Naperville, IN.
Seven grandchildren and thirteen great-grandchildren, in addition to several nieces and nephews, survive as well.
She was preceded in death by her spouse, four brothers and three sisters.
Friends are invited to visit with Lucille’s family from 11 to 1 p.m. at St. Michael’s Church, 612 N, Center St., Plymouth, on Saturday, November 14, 2009.
A Mass of Christian Burial for Lucille will follow the visitation at 1 p.m. The Rev. Father William Kummer will officiate.
Entombment will be in the New Oakhill Mausoleum. Memorial gifts in Lucille’s memory may be given to St. Michael’s School, 612 N. Center Street, Plymouth, Indiana 46563