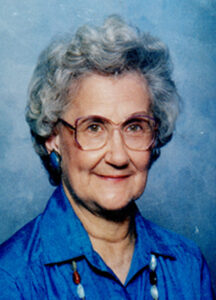 Lifetime Plymouth resident, Lucy A. Schlosser, 87, passed away peacefully in her home at 11:01 a.m. on Monday, October 1, 2018.
Born in Plymouth, Indiana on March 13, 1931, Lucy was the daughter of Charles A. and Agnes H. (Crist) Richard. She graduated from Argos High School with the class of 1949.
On April 11, 1953 in St. Michael Catholic Church, Lucy married James R. Schlosser. The couple would run a dairy farm for 8 years and raise five children. He would precede her in death on May 23, 1961. Lucy worked for Dr. William Middleton in Argos as a dental assistance for 22 years intermittently. She then worked for First Source Bank as a teller for 18 years until her retirement in 1999.
Sewing, gardening and making sure she fed everyone, hungry or not, made Lucy happy in life. She was very giving to everyone, and loved being with her grandchildren. She also enjoyed lunch dates with her classmates and fellow retirees from the bank.
She was a lifetime member of St. Michael Catholic Church, a member of the Altar Rosary Society and the Friendly Circle Club.
Lucy is survived by her children: Jake Schlosser (Kandi Davis) of Bourbon, Dave Schlosser (Marlene Hatfield) of Bourbon, Linda (Brent) McCay of Tippecanoe, Sandra Borys-Hibner (Jim Allyn) of Culver and Karen Clark of South Bend; 19 grandchildren and 31 great-grandchildren; and siblings: Lewis Richard of Plymouth, Raymond Richard of South Bend and Judy (Thomas) Stevenson of New Mexico.
She was preceded in death by her husband; parents; grandchildren: Joshua and Jocelyn Schlosser; great-grandchildren: Kaylee Borys and James Ivan McCay; and siblings: Martha Zeiger-Barker, Joseph Richard, Loyola Davis, Robert Richard, and infants: George and Mary Richard.
Visitation will be from 3-5 p.m. on Sunday, October 7, 2018 in the Johnson-Danielson Funeral Home, 1100 N. Michigan Street, Plymouth. A Rosary will be recited at 5 p.m.
Mass of Christian Burial will be held on Monday, October 8, 2018 at 11 a.m. in St. Michael Catholic Church, 611 N. Center Street, Plymouth. Visitation will be held in the church one hour prior to mass.
Burial will follow in the New Oak Hill Cemetery, Plymouth.
Memorial contributions can be made to St. Michael Church, 612 N. Walnut Street, Plymouth, IN 46563 or the donorâ€™s choice.