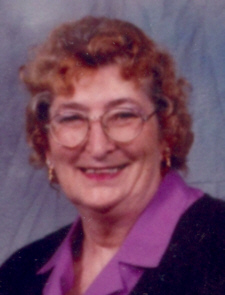 Luella Marcille Zehner Moyer, 80, died of natural causes at her residence at 8:30 a.m. on Wednesday, March 28, 2012.
Born at home in Plymouth, on February 17, 1932, Luella was the daughter of Harold Oscar and Frances Luella Roberts Zehner.
A graduate of Plymouth High School with the class of 1950, she lived in Plymouth all of her life.
On October 6, 1950, Luella and Robert Lee Moyer were married in the parsxonge of the Plymouth Methodist Church. Robert died on January 26, 1999.
A homemaker, she worked for 12 years, from 1987 to 1999 for American Greeting Cards, for Del Monte from 1985 to 1988 and was an Avon Lady for 38 years, retiring this past February.
Very talented with her hands, she did all sorts of crafts, sewed and embroidered. She collected ceramic chickens and roosters.
Luella is survived by two daughters, two sons and a god-son. They are daughters: Yvonne M. (Jerry) Quint and Diana K. Johnson, of Plymouth, and sons, Douglas R. (Deb) Moyer, Oregon, WI.,: and James K. Moyer, Plymouth. God-son Jeff Motts of Tampa Bay, FL. was like a brother to Luella’s children.
A brother, Oscar M. Zehner, Port St. Lucie, FL. and a sister, Anna M. Bruski of Lockport, N.Y., also survive together with sisters-in-law, Marlene (Herb) Glassman, Dawsonville, GA., Joan and Harlen Truax, Pittsboro, IN., and Jean Zehner, Monticello, IN. A brother-in-law, George (Janet) Moyer, Union, MI., survives as well, along with twelve grandchildren and thirteen great-grandchildren and an uncle, Wayne Zehner of Plymouth.
Luella was preceded in death by her parents, her beloved husband, Robert, a son, Neil, a brother, Arthur Zehner and a brother-in-law, Fred Bruski.
Visitation with the family will be from 4 to 8 p.m. on Saturday, March 31, 2012, at the Johnson-Danielson Funeral Home, 1100 North Michigan St., Plymouth.
Funeral services for Luella will be at 1:00 p.m., on Sunday, April 1, 2012, at the funeral home. The Rev. Charles Krieg will officiate.
Interment will be in the New Oakhill Cemetery.
Memorial gifts may be made to the Center for Hospice Care, 112 S. Center Street, Plymouth, Indiana 46563.