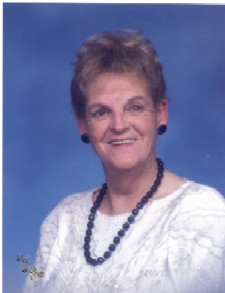 Lula Mae Wallace, of Michigan Road, Argos, died at Pilgrim Manor Nursing Home at 7:05 a.m. on Tuesday morning, June 16, 2009. Born in Plymouth, Indiana on February 24, 1932, she was the daughter of Bina B and Lula M. Hall Nitcher. She attended Plymouth Schools.
On October 19, 1968, in Plymouth, Lula and Devere M. Wallace were married.
She worked at Coppes Kitchens in Nappanee.
Lula absolutely loved flowers and had many large flower gardens. She enjoyed reading, watching old westerns, and listening to old music. Lula was also very fond of crocheting, she used to make baby blankets and dolls.
She attended Plymouth Baptist Church. Lula is survived by her husband, Devere, Argos; 10 children, Johnnie (Claudia) Smith of Bourbon, IN; Virginia (Hank) Sherk and Sherry Dixon both of Brownsville, KY; Jackie Masten, Bremen, IN; Lorraine (Jim) Cummins, Kenneth (Barbara) Pritchett, and Marjorie (Dwain) Everly all of Plymouth, IN; Ray (Connie) Pritchett, Silver Lake, IN; Betty Kuhn (Carl Gragg), and Jeff (Judy) Pritchett both of Argos. 41 grandchildren, 80 great grandchildren, 10 great-great grandchildren, and 5 step great grandchildren survive as well, along with one sister Virginia Spencer of Plymouth.
She was preceded in death by her parents, a son Glenn Smith, a step-daughter Leea D. Wallace, 2 grandchildren Hank Bush and Christine Smith, 1 great grandchild Abbygail Christlieb, 4 sisters Martha Salach, Goldie Morrison, Betty Ritter, and Jeannette Rensbergerand, and a brother George Nitcher.
Friends are invited to celebrate Lula’s life with her family from 4 to 8 p.m. on Thursday, June 18, 2009, in the Johnson-Danielson Funeral Home, 1100 N. Michigan St., Plymouth, Indiana.
Funeral services for Lula will be held in the Plymouth Baptist Church on Friday June 19, 2009 at 11 a.m. Rev. Doug Jividen will officiate. Burial will follow in New Oakhill Cemetery, Plymouth.
Memorial contributions in Lula’s name may be given to Southern Care Hospice.