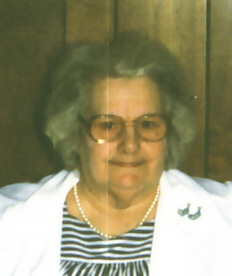 Lyla R. Whaley, who had made Miller’s Merry Manor her home since September of 1999, died there of natural causes at 6:14 p.m. on Thursday, December 13, 2007. At the age of 97 she has been a lifetime Marshall County resident.
Born in a log cabin in Donaldson, Ind., on March 12, 1910, Lyla is the daughter of Vernon and Laura E. (Morris) Maxson.
She was educated in LaPaz Community Schools.
On Dec. 31, 1927, in Joliet, Ill., Lyla and Porter James Whaley were married. Porter preceded her in death on March 19, 1973.
Lyla was a homemaker and manager of the children’s department of Montgomery Ward, Plymouth, for over 20 years.
A devoted mother and grandmother, she loved her grandchildren and enjoyed the company of her pet Finch and Parakeet along with two favorite “Cabbage Patch” dolls.
She was a former member of the Plymouth Christian Church.
Lyla is survived by two sons: David F. (Marilyn) Whaley, South Bend and William A. (Ethel) Whaley, LaPaz and daughter-in-law Ruth Whaley of Lakeville.
Twelve grandchildren, 35 great-grandchildren and 17 great-great grandchildren survive her death, together with a brother, Lloyd Maxson of Olympia, Kentucky.
In addition to her parents and spouse, Lyla was preceded in death by her son Robert G. Whaley, a granddaughter, Judith Ann Whaley, two sisters, Faye Stokes and Mildred Holloway and two brothers: Aaron and Lowell Maxson.
Friends are invited to celebrate the life of Lyla Whaley from 1 to 3 p.m. on Sunday, Dec. 16, 2007, in the Johnson-Danielson Funeral Home, 1100 N. Michigan St., Plymouth, Ind.
Funeral services for Lyla, officiated by the Rev. Charles Krieg, will follow visitation at 3 p.m. in the funeral home.
Burial will be in New Oakhill Cemetery, Plymouth.
Memorial gifts in Lyla’s memory may be made to the American Diabetes Association.