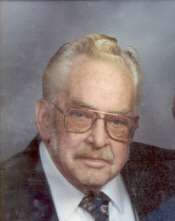 M. Dale Scarberry, 76, died following an extended illness, at his residence, 233 Lake Ave., at 8 p.m. on Saturday, April 26, 2003. Dale has been a Plymouth resident since 1955, coming from Ashland, Ohio.
Born in Urbana, Ohio, on December 12, 1926, Dale was the son of Oscar and Frances Esther Reams Scarberry. He attended schools in Ohio and earned his G.E.D. after moving to Plymouth.
A veteran of the United States Navy in W.W.II, Dale sang in the Navy Choir while in the service. On January 5, 1947, in Urbana, Dale and Patricia A. Chambers were married. His wife and his family have always been his first loves.
Dale worked at Auto-Lock Castings Repair, a company owned by his father. He came to Plymouth as a sales representative for this area. After retirement from Auto-Lock, he started doing general home repair and was an excellent and sought after carpenter. He enjoyed woodworking of all kinds.
Dale loved music. He played several instruments by ear and sang in the First United Church of Christ’s choir. He was also part of a barber shop quartet and collected musical instruments and all types of music.
He was a member and Past Master of the Plymouth Masonic Lodge.
Dale is survived by Pat, his wife of 56 years, and their seven living children. The sons are: Daniel and Sandy Scarberry, Henderson, Nev.; Geoff and Cheryl Scarberry; Rob Scarberry, all of Plymouth; and Tim and Michelle Scarberry, Ft. Wayne, Ind.
Their three daughters, twins, Dee-Ann and Mike Schroeder and Di-Ann and Glen Houin and Amy and Lawrence Harner, are all of Plymouth.
Fourteen grandchildren and three great-grandchildren also survive together with Ann Dunbar, a half sister, living in Ohio, and John P. Massey, a son-in-law of Evansville, Ind.
Dale was preceded in death by his parents; a daughter, Susan Carol Massey; a grandson, Zachary Houin; a brother, David O. Scarberry and a sister, Norma Jean Engle.
Friends may call at the Johnson-Danielson Funeral Home, 1100 N. Michigan St., Plymouth, on Tuesday, April 29, 2003, from 4 to 8 p.m., and at the church one hour prior to services on Wednesday.
Masonic services will be held at 8 p.m. on Tuesday evening in the funeral home.
Funeral services, officiated by the Rev. Dr. David Moffett-Moore, pastor of the First United Church of Christ, where he was a member, will be held in the church, 321 N. Center St., Plymouth, on Wednesday, April 30, 2003, at 11 a.m.
Military graveside services at new Oakhill Cemetery will be conducted by the Plymouth V.F.W., #1162.
Memorial gifts in Dale’s memory may be made to the Marshall County Hospice or to the First United Church of Christ.