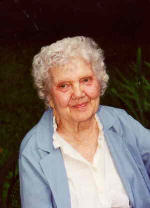 A longtime area resident, M. Ethel Roth, 94, who resided on S. Michigan St. , Plymouth , died of natural causes in St. Joseph Regional Medical Center, Plymouth , at 9:55 p.m. on Tuesday, April 9, 2002. The mother of Ray Roth, a television news reporter/photographer of Plymouth and Marte Roth, a retired Air Force Maj., and his wife Patricia, of San Antonio , Texas , Ethel was admired for her friendliness and her devout religious beliefs. Having never driven a car, for years, rain or shine, she walked to work, daily Mass at St. Michael’s Roman Catholic Church, grocery shopping and downtown errands. Born in Earl Park, Ind. , on July 6, 1907 , Ethel was the daughter of Aloysius and Celesta Keller Gretter. She attended Iowa Schools. On July, 1940, in Plymouth , Albert M. Roth, a studio photographer, and Ethel Gretter were married. Albert died on August 19, 1960. Ethel was a telephone operator and supervisor for United Telephone for over 40 years. She retired in 1972 after witnessing much advancement in telephone technology. She loved antiques, especially furniture and jewelry. She also had an extensive collection of hats, which she was often noted for wearing. Ethel was quick to share her memories of years past. As a devoted member of St. Michael’s, Ethel served in the Altar Rosary Society and for many years headed the group of ‘Pilot Lady Paper Stuffers’ from which numerous improvements occurred to the church and rectory. Ethel is survived by her sons, her four grandchildren and three great-grandchildren. Marte’s two sons, Randall Roth, and his wife Alissa, of Houston, Texas and James Roth, and his wife Melissa, who live in San Antonio . Ray’s son, Daniel P. Roth and daughter, Amy, her husband Bruce Knapp and their children, Emily, Joseph and Nathan, all reside in Plymouth . Two sisters and three brothers also survive. They are: Loretta Hope and Theresa Navarro, both of Long Beach , Calif. , and Paul Gretter, Vero Beach , Florida ; Urban and Rita Gretter of Ft. Myers , Florida and Cletus Gretter of Arizona . Ethel was preceded in death by her spouse, an infant son, Roger Roth, three brothers, Bob, Clem and Mark Gretter, a sister Margareite Baxter and a daughter-in-law, Dawn Roth. A celebration of Ethel’s life will be held on Friday, April, 12, 2002 , from 4 – 7 p.m. in the Johnson-Danielson Funeral Home, 1100 N. Michigan St. , Plymouth . A Parish Rosary will be held at 7 p.m. in the funeral home. A Mass of Christian Burial, officiated by Father Anthony Gillespie, will be held on Saturday, April 13, 2002 , at 9 a.m. in St. Michael’s Roman Catholic Church, 625 N. Center St. , Plymouth . Ethel will be laid to rest in New Oakhill Cemetery, Plymouth . Memorial gifts in her memory may be made to the St. Michael’s Altar/Rosary Society