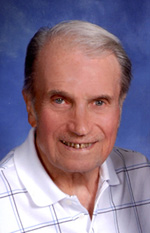 M. â€œJerryâ€ Buchman, 89, of Culver since 1995, passed away peacefully Thursday afternoon in the Millerâ€™s Merry Manor, Plymouth.
Jerry was born September 27, 1927 in Chicago, Illinois to the late Daniel and Mary (Porodzynski) Buchman.
He graduated from Fenger High School in 1946. He then went on to serve in the United States Army from 1946 to 1947 in Germany.
On August 14, 1954 in Chicago, he married Virginia Doris Bouchard; she survives.
Jerry retired in 1993 after twenty-six years of service from the University of Illinois Medical Center, where he was a System Analyst.
Surviving is his wife, Virginia â€œGinnyâ€ of Culver, daughter; Denise (Richard) Einecker of Des Plaines, Illinois, four sons; Daniel (Renee) Buchman of Darien, Illinois, David (Sharon) Buchman of Chicago, Douglas (Jacqueline) Buchman of Schaumburg, Illinois, Donald (Thao) Buchman of Encinitas, California. Also surviving are his grandchildren; Jason Buchman, Ashley Esposito, Tyler Buchman, Kyle Buchman, Caitlin Buchman, Allyson Buchman, Brynn Einecker and Marisa Buchman.
Jerry was preceded in death by his parent and two sisters; Stella Madej and Patricia Winston.
Family and friends will gather at the Johnson-Danielson Funeral Home, 1100 North Michigan Street, Plymouth, to celebrate the life of Jerry on Sunday, July 16th from 3 â€“ 7:00 p.m. A Mass of Christian Burial will be held at St. Mary of the Lake Catholic Church, 124 College Avenue, Culver, Indiana 46511 on Monday, July 17th at 11 a.m. with Father Glenn Kohrman officiating.
Burial will be in the Washington Cemetery, Culver.
Memorial contributions may be directed to St. Mary of the Lake Catholic Church.