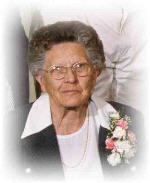 Mabel C. Eby, 87, LaPaz, Ind., a resident since 1951, coming from Elkhart County with a short stay in St. Joseph County, has died. Mabel died of natural causes in the caring company of her family at 7:14 p.m. on Wednesday, July 10, 2002 , in the Bremen Health Care Center . She was born in St. Joseph County, the daughter of William M. and Elizabeth Hunsberger Klein, on August 14, 1914. She graduated from the Madison Township School, near Wakarusa with the class of 1932. On July 1, 1939 , in Nappanee, Mabel and Robert C. Eby were married. Robert died on April 10, 1993. She first worked in the 1930s at Ball Band in Mishawaka and later was employed at Superior Furniture, Nappanee and Jones Furniture, Wakarusa. Adept with her hands, she enjoyed sewing and crocheting. A talented gardener, Mabel especially loved flowers. Mabel had attended the LaPaz Church of God and the Indiana Chapel Missionary Church, northwest of LaPaz. She is survived by two daughters and their families. Marilee A. and David Huber, Bremen , and Melba L. and Art Green, Elkhart . Four grandsons also survive: Dwayne Huber, Elkhart , Brian Huber, LaPaz, Brett and Sean Dolgos, both of Nappanee. Three granddaughters survive as well. They are: Michelle and Darrell Florey, Walkerton, Elizabeth and Brian Harrington, Louisville , Ky. , Stephanie and John Rose, South Bend . Jay and Helen Klein, a brother and sister-in-law of Wakarusa and Pauline Contat, a sister, living in Truth or Consequences, New Mexico, survive as well. Mabel was preceded in death by her parents, her spouse, a brother, Lewis Klein and two sisters, Ethel Brown and Florence Holdeman. Visitation and a sharing of memories will be held from 3 to 7 p.m. , on Sunday, July 14, 2002 , in the Johnson-Danielson Funeral Home, 1100 N. Michigan St. , Plymouth . Funeral services for Mabel will be at 10:30 a.m. on Monday, July 15, 2002 , in the funeral home. The Rev. Ervin Mize, pastor of the Church of God , Bremen , will officiate. Burial will be in the Bremen Cemetery . Memorial gifts may be made in Mabel’s memory to Marshall County Hospice, Alzheimer’s or Diabetes Foundations.