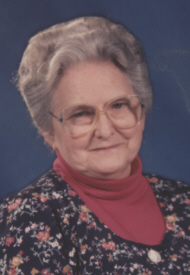 Mable Gaynell Josleyn, 80, a resident of the area for over 40 years, passed away at 4:05 a.m. on Wednesday, March 12, 2014 at her home in the loving care of her family and hospice.
The daughter of Ralph and Lucille (France) Huggins, Gaynell was born on June 4, 1933 in Madisonville, KY. She attended school in Madisonville.
On March 2, 1948, Gaynell and Clyde Ray Josleyn were united in marriage in Madisonville, KY. Clyde preceded her in death on July 20, 1993.
She worked as a CNA for 30 years, most of the years at T.L.C. Nursing Home in Bremen, then at Pilgrim Manor in Plymouth.
Gaynell was a lifetime member of The House of Prayer United Pentecostal Church in Plymouth. She enjoyed sewing, doing crafts and playing board games with her family.
Surviving Gaynell are three daughters: Judy Kuchel, Janice (Mark) Smith and Lisa (Bennett) Brennan all of Tyner; two sons: Mike (Teresa) Josleyn and John (Karen) Josleyn, both of Benton, Kentucky; a daughter-in-law: Susie Josleyn of Benton, KY; 21 grandchildren; 39 step-grandchildren ; two great-grandchildren; two sisters: Lois Burns and Shirley Hill, both of Madisonville, KY and three brothers: Ronnie Huggins of Jacksonville, TX, Other Huggins of Central city, KY and Charles Huggins of Owensburg, KY.
She was preceded in death by her parents; her husband, Clyde; three sons: Jerry Josleyn, Dougless Josleyn and Benny Josleyn; a daughter: Linda Gail Josleyn; a granddaughter: Marie Bloomfield; two brothers: William Huggins and Marvin Huggins and a sister: Eva Adams.
Visitation will be from 5 to 8 p.m. on Friday, March 14, 2014 in The House of Prayer United Pentecostal Church, 12450 Plymouth-Goshen Road, Plymouth. Funeral services, officiated by Pastor Ronald Humphrey, will be held in the church at 2:00 p.m. on Saturday, March 15, 2014.
Burial will be in New Oakhill Cemetery.
Memorial gifts may be made to The House of Prayer.