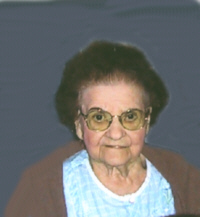 Lifetime area resident, Madeline H. Burch, Walkerton, Ind., died of natural causes in Saint Joseph Regional Medical Center, Plymouth, at 2:17 p.m. on Sunday, Dec.9, 2007. She was 90-years-old.
Madeline was born on March 1, 1917, in Warsaw, Ind., the daughter of Daniel T. and Ada E. Hartman Cole.
She attended Tyner schools and took extension courses from Purdue University in order to become a dietician.
On Dec. 6, 1936, in Donaldson, Ind., Madeline became the bride of Lloyd R. Burch. Lloyd preceded her in death on June 7, 1992.
She was first a dietician for Pilgrim Manor and retired from Miller’s Merry Manor after nearly 20 years of dedicated service.
A member of the Blissville Church of the Brethren where she was involved in many organizations and activities, Madeline particularly enjoyed being with her family.
She is survived by a daughter: Sandra Cleveland, Clovis, Calif.; two sons: Ronald L. (Cindy) Burch, and Delmas G. Burch, all of Tyner, Ind., six grandchildren: Kimberly, Kelly, Russell, Dee Anne, Douglas and Chad and numerous great-grand-children.
A brother, Raymond C. Cole, Tyner, Ind.; a brother-in-law and sister-in-law: Dwight and Pauline Burch, Walkerton, Ind., and a sister-in-law: Mildred Cole, Plymouth, also survive.
Madeline was preceded in death by her parents, her husband and three sisters: Grace Stutzman, Clara Shanafelt and Marian Cole. Four brothers have also predeceased her: Lester, Earl, Daniel and Luther Cole.
Friends are invited by her family to share memories and celebrate the life of Madeline on Friday, Dec. 14, 2007, from 4 to 8 p.m. in the Johnson-Danielson Funeral Home, 1100 N. Michigan St., Plymouth, and one hour prior to the funeral services for Madeline which will be at 11:30 a.m. on Saturday, December 15, 2007, in the Blissville Church of the Brethren, 6250 Spruce Trail, Plymouth, Ind. The Rev. Dester J. Cummins, pastor of the church, will officiate.
Interment will be in the Tyner Cemetery, Tyner, Ind.
Memorial gifts in Madeline’s name may be made to the Blissville Church of the Brethren.