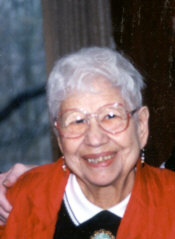 Madeline H. Saballus, 95 of 9601 Union Road died Friday November 28, 2003 at 7:47 P.M. in the Catherine Kasper Nursing Home, Donaldson, Indiana
Madeline was born on March 4, 1908 in Herrin, Illinois. She retired in 1975 as Registered Nurse.
She is survived by one daughter and three sons, Rosemary Doughtery, Springfield, Ill, Ronald Saballus, Plano, Ill, Donald Saballus, Evanston, Ill., and Jerry Saballus, Sister Bay, Wis., A brother, Dominic Parisi, San Diego, Ca., and a sister, Sister Carmeline Parisi, P.H.J.C. survive her as well. Madeline was preceded in death by a brother, Carmel Parisi.
Visitation will be held Tuesday, December 2, 2003 from 4:30 to 9:00 P.M. EST. in the Catherine Kasper Life Center Chapel, Donaldson, Indiana.
A Mass of Christian Burial will be held Wednesday, December 3, 2003 at 10:00 EST. A.M. in the Catherine Kasper Life Center Chapel, with Father Ed Konerman officiating.
Madeline will be buried in the All Saints Cemetery at 2:00 EST. in Des Plaines, Illinois.
Memorial contributions may be made to the Poor Handmaids of Jesus Christ.