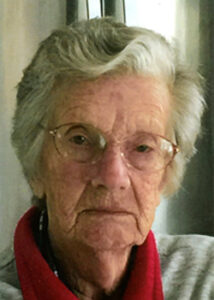 Marcelle L. Hartman Flory Craft, 90, passed away in her home at 8:58 a.m. on Saturday, July 1, 2017.
She was born May 13, 1927 in Plymouth to Richard and Daisy (McCollough) Hartman. She enjoyed farm life growing up and graduated from High School in 1945. Marcelle worked for Forrest Zumbaughâ€™s Internation dealership, Schlosser Brothers, Parkview Hospital as a cook and retired after many years at American Optical. She enjoyed fishing, gardening, crocheting, making quilts and feeding humming birds. On October 24, 1945; she married Raymond Flory. He died July 9, 1970. On October 13, 1973; she married James Craft of Argos in Clintwood, Virginia. He preceded her in death October 16, 2014. They had four children; Kay Metsker of Plymouth, Richard (Vickie) Flory of Plymouth, Joan Flory of Argos, and Letha Taber of Broken Arrow, Oklahoma. Eight grandchildren; John Metsker II and Stephanie Metsker of Plymouth, Keesha (Mark) Schmucker of Nappanee, Chad (Jessica) Flory of Goshen, Alesha Flory of Plymouth, Jerame (Stephanie) Hensley, Justin (Shawna) Hensley both of Argos, Ryan Cook of Broken Arrow, Oklahoma, six great-grandchildren; Brittany (Zach) Troyer of Wakarusa, Dane Schmucker of Nappanee, and Beckham and Briggs Flory of Goshen, Kwinton Bunton of Plymouth, Elijah Hensley of Argos, one great-great- grandchild; Tucker Troyer. Also surviving are her four sisters; June Smith of Bremen, Mary (Carl) Fox of Plymouth, Treva (Ralph) Magnuson of Sebring, Florida and Martha (Denny) Nicholas of Bremen, sister-in-law; Tyrus Hartman.
She was preceded in death by her brother; Leonard Hartman, parents and two husbands.
Visitation will be held on Thursday, July 6, 2017 in the Johnson-Danielson Funeral Home, 1100 North Michigan Street, Plymouth from 4-8 PM.
Graveside services will be on Friday, July 7, 2017 at 11 a.m. in the New Oak Hill Cemetery, Plymouth.
In lieu of flowers, memorial donations can be made to the family.