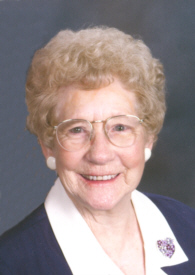 Mardelle J. Kaufman VanVactor, 93, died on Thursday, February 14, 2013, in Miller’s Merry Manor, Syracuse, IN.
Born in Marshall County on August 14, 1919, Mardelle was the daughter of Harley and Pearl (Gottchalk) Sarber.
She lived in LaPaz, Indiana from her birth until 1968 when she moved to Plymouth.
A graduate of LaPaz High School with the class of 1937, she also graduated from the South Bend Business College.
She had been employed as a secretary at the Bendix Corp. in South Bend and worked at her father’s business, Sarber’s Hardware in LaPaz. She later was a salesperson at Bosworth’s Dept. store in Plymouth.
Mardelle served as a secretary in the Marshall County Surveyor’s office, a position she later retired from.
She was first married to Lyle Kaufman in 1941. He would precede her in death on September 13, 1972. She then married Joseph VanVactor on May 21, 1983 who then died on October 26, 2009.
For many years she was a member of the First United Methodist Church in Plymouth.
Mardelle is survived by two sons: Gary L. (Ellen) Kaufman, Goshen, IN. and Brent L. (Mary) Kaufman, Rochester, IN. A step-son, Jon (Ruth) VanVactor and their son Ethan all of Plymouth also survive with one step-daughter Joanne.
Six grandchildren and two great-grandchildren also survive. They are Gary’s children: Laurie (Troy) Graham and their daughter, Alanna, Syracuse, IN., Michael (Aimee) Kaufman and their son, Wyatt, Goshen, IN., Jill Kaufman, Goshen, IN., and Jayne (Caleb) Alexander, WA.
Brent and Mary’s children are Stacy Kaufman and her son Cameron, Plymouth, IN. and Ryan (Kim) Kaufman, Belmont, N.C.
Mardelle was preceded in death by her parents, her husbands, and two sisters, Lucille Peters Ward and Rosemary Kaufman.
The family will receive friends at the Johnson-Danielson Funeral Home, 1100 N. Michigan St., Plymouth on Tuesday, February 19th from 5 – 7 p.m. Services conducted by Pastor Larry Marhanka, will be on Wednesday, February 20th at 11 a.m. in the funeral home. Burial will follow Oakhill Cemetery in Plymouth.
Memorial gift contributions may be made to the First United Methodist Church – Chancel Choir Fund, 400 N. Michigan St., Plymouth, IN 46563