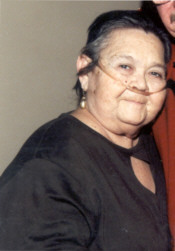 Margaret Ann “Peggy” McNeal, 67, 311 Center St., Bourbon, Ind., died, after a long illness, at 2:33 p.m. on Wednesday, April 30, 2003, in Saint Joseph’s Regional Medical Center, Plymouth.
Born in Lexington, Ill., on February 9, 1936, Peggy was the daughter of Frank and Eva Gayhart Farner. She attended Illinois schools.
She and Richard McNeal were married on October 6, 1962, at Koontz Lake, Ind.
A dedicated homemaker and housewife, Peggy raised her five children and enjoyed their activities and growing-up years. She also had three birds and a loving dog, “Cody.”
Peggy loved flowers and enjoyed gardening. She spent time working puzzles, sewing and knitting. She had a fun collection of clowns of all kinds.
She is survived by her husband Richard of Bourbon and their two sons and three daughters.
Her sons are Richard McNeal, Jr. and Woodward McNeal, II, both of Bourbon. Her daughters are Frances and John Kratzchmar, Calif., Barbara and Benny Cripe, Ligonier, Ind., and Lisa and Don Huddleston, Gary, Ind.
A brother, Frank and Sharon Farner, in Miss., and a sister, Wanda Farner, living in Ill., also survive together with 11 grandchildren and 7 great-grandchildren.
Peggy was preceded in death by her parents and a daughter, Peggy Ann McNeal. Two sisters, Mary Morman and Margie Bartel and two brothers, Joe Farner and Guy Farner are also deceased as well as a granddaughter, Cindy McNeal.
Friends may call from 4 to 7 p.m. at the Johnson-Danielson Funeral Home, 1100 N. Michigan St., Plymouth, on Sunday, May 4, 2003. Funeral services will be held at 11 a.m. on Monday, May 5, 2003, in the funeral home. The Rev. Lyle Breeding, a pastor of the Plymouth Wesleyan Church, will officiate.
Burial will be in New Oakhill Cemetery, Plymouth.
Memorial gifts in Peggy’s memory may be made to the Marshall County Hospice.