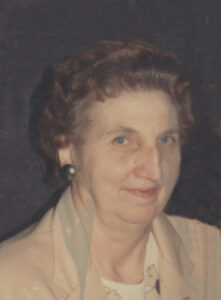 Margaret C. “Marge” Gilley, a River Park resident in Plymouth, passed away Thursday morning.
She was born on August 5, 1927, to Grace (Deveny) and Pete Wickey in Plymouth, Indiana. Throughout her life, Marge was the heart of her family. Known for her kindness as well as her strength of character, Marge was survived by her brother, James “Pete” Wickey, of Plymouth. Marge was married on April 20, 1946, to the love of her life, Leonard “Al” Gilley, who preceded her in death. Marge was the proud mother and loving grandmother of six children, thirteen grandchildren, and several great-grandchildren. She was survived by two daughters; Kaye Wilcox of Wiggins, Colorado and Vickie Blair of Plymouth; three sons; Leonard J. “Butch” Gilley of Plymouth, Jerry (Emma) Gilley of Jacksonville, Florida, and Rick (Julie) Gilley of Plymouth. She was also survived by her grandchildren; Chris (Jayme) Gilley of Indianapolis, Indiana, Jason (Jennifer) Kreighbaum of Hershey, Pennsylvania, Mike Gilley of Plymouth, Indiana, Aaron (Jessica) Gilley of Monterrey, Indiana, Patrick Gilley of Jacksonville, Florida, Hilary Gilley of Atlanta, Georgia, Christine Aronow Of West Palm Beach, Florida, Jacky Gilley of West Palm Beach, Florida, Mary Lampkin of Wiggins, Colorado, Andrea Winquist of Flora, Indiana, Kara Gilley of Plymouth, Indiana, Valerie Blair of Plymouth, and Marcie Blair of Plymouth.
Marge was preceded in death by daughter, Beverly Kreighbaum.
Marge was a devoted member of the Plymouth St. Michael’s Catholic Church and was a member of the VFW Auxiliary for a number of years. Marge was very strong, even as her days on Earth became fewer. Although she will be sorely missed, Marge’s spirit will continue to live on through her family and the many that knew her.
Friends are invited to greet and share memories with Marge’s family on Sunday, August 3, 2014, from 6 to 8 pm, with a Holy Rosary at 7:30 pm., at the Johnson-Danielson Funeral Home, 1100 North Michigan Street, Plymouth, Indiana. A Mass of Christian Burial will be held at St. Michael Catholic Church, 612 North Walnut Street, on Monday August 4, 2014 at 11 a.m. Burial will follow immediately after and will be at New Oak Hill Cemetery, Plymouth, Indiana. Memorials in Marge’s name may be given to the St. Michael’s Parish, 612 N. Walnut St, Plymouth, IN 46563.