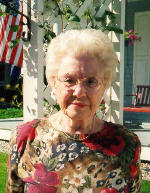 Margaret Elizabeth Ames, formerly of Bourbon and a long time Plymouth resident at 411 E. Washington St., Plymouth, died in Pilgrim Manor at 2:35 a.m. on Wednesday, April 24, 2002. She was 94-years-old. Born in Glidden , Wis. , on Nov. 28, 1907 , Margaret was the daughter of Charles H. and Della Mae Whittemore Amones. In 1909 the family moved to Indiana and Margaret was reared on a farm east of Plymouth . She graduated from Plymouth High School with the class of 1925 and attended Nursing School . On April 17, 1927 , Margaret and Glenn A. Ames were married in Plymouth . After 63 years together, Glenn preceded her in death on January 27, 1990. A retired real estate salesperson for over 25 years, Margaret was a member of the First United Methodist Church . She leaves to morn her passing one daughter, Glenda C. Hubbard of Plymouth, a grandson and his wife, Lane and Jennifer Laffoon of Plymouth; and two granddaughters, Jan E. Lanham and her husband, Daniel of West Virginia and Valerie J. Schafer and her husband, Robert of Plymouth . Four great-grandchildren and three great-great grandsons, as well as a brother, Harold Amones and his wife Betty of Bixley, Oklahoma and three sisters; Beatrice Anders, Mildred Shively, and Geraldine and her husband, Robert Zimmerman all of Plymouth, also survive. Margaret was preceded in death by her parents, her spouse, two sisters; Venus (Mrs. Carl Chenowith) and Donna Jean (Mrs. Forest Brundige) and five brothers, Gerald, Donald, Dwain, Charles and Eldon Amones. A celebration of her life and visitation with her family will be on Friday, April 26, 2002 , from 4 – 7 p.m. in the Johnson-Danielson Funeral Home, 1100 N. Michigan St. , Plymouth . A funeral service for Margaret, officiated by Rev. Dean Fager, pastor of the First United Methodist Church , Plymouth will follow visitation at 7 p.m. Burial will be in Oakhill Cemetery , Plymouth . Memorial gifts in Margaret’s memory may be made to the Marshall County Hospice Program.