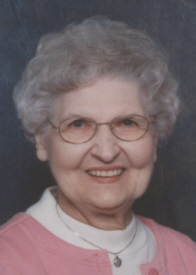 Margaret Henrietta Petron, 97, passed away Wednesday, July 23, 2014, at the St. Joseph Regional Medical Center- Plymouth Campus. Margaret Henrietta (Ostrowski) Petron was born on a farm near Browerville, MN on May 20, 1917, the 8th of nine children to Joseph and Hedwiga (Nanik) Ostrowski. She had five sisters; Gertrude Pozorski, Mary Ostrowski, Sophie Kubitza, Pearl Brown, and Eleanor Beckers and three brothers, Andrew Ostrowski, Louis Ostrowski and George Ostrowski. Margaret graduated from Elementary Grades in 1931 from Rural District 99, Ward Township of Todd Co., High School from Browerville High in 1935 and Teacher’s Training Institute, Staples, MN in 1936. While remaining with her parents and family she taught Elementary grades in the Rural Schools of Todd Co. for 7 years. On October 20, 1943 Margaret married her high school classmate, Robert Petron at St. Joseph’s Catholic Church in Browerville, MN. For eight months the couple lived in Oakland, CA. Robert served in the armed forces on Treasure Island and Margaret worked at J.C. Penny Co. In June of 1944 Robert was sent to Kansas and Texas for re-training before embarking by boat to the Philippines in December. Margaret followed her husband to both places and then went to her parents in Browerville for a visit. She came to South Bend, IN to work at the American Trust Bank in South Bend.
Following the end of the war Robert returned home and was discharged from the Army in December 1945 and the couple decided to make their home in South Bend, IN. After living in three places they bought a home on West Edison Rd in South Bend, where they lived for over 45 years. They raised five sons, Donald, Kenneth, Frederick, Gerald and Edward. The family belonged to Holy Family Catholic Church on Mayflower Rd. and their social life revolved around the church and school. All the boys graduated 8th grade from Holy Family School.
After Robert retired from his part-ownership in the Delta-T Co. in South Bend in 1978 the couple traveled to various states where their sons were employed. They also went overseas to Japan and Hawaii, Germany and the Vatican in Rome, Italy. They also visited Alaska in 1991. Margaret visited Poland in 2003 and Scotland in 2006.
When Robert became disabled in 1997 they sold their home and moved to Donaldson, IN to an apartment with the Ancilla Domini sisters called the Maria Center. Robert passed away on January 4, 1999. Margaret continued to reside there and became a member of the Associates. Until 2007 she participated as a volunteer as choir member, Eucharistic Minister, Rosary Group and conducted Rosary and Communion Service at the Catherine Kasper Home. Previously while living in South Bend she held offices in Altar Rosary Society of Holy Family Church, the DCCW and Women’s Council for Human Relations, an Ecumenical group. She also taught quilt making at Forever Learning Institute in South Bend. Margaret’s hobbies include study of World and Religious History, quilting and writing poetry. Her parents and all siblings have preceded her in death as well as her husband, Robert and four of their five sons; Kenneth, November 4, 1992, Edward, April 20, 2002, Frederick, May 11, 2004 and Donald, May 31, 2010. She is survived by one son Gerald Petron (Carole) who resides in Deltona, FL. Others include granddaughters, Gloria Petron (Rick Marx) of Brooklyn, NY, Margaret Marcus (David) of Georgetown, TX, and Emily Hacker (Jeff) of Bloomington, IN and great-grandsons Joe Hacker and Dean Marx. Margaret is also survived by great niece Joanne Pozorski-Szalay and great-great nieces Elizabeth Szalay and Rosemary Szalay, niece Evelyn Pozorski, nephew Joe (Kathy) Pozorski, and nieces Polly Matthews, and Mary Ann Best along with a great number of nieces, nephews, extended family members, friends and associates.
Visitation will be held on Friday, July 25, 2014 from 3 – 7 p.m. in the Johnson-Danielson Funeral Home, 1100 N. Michigan St., Plymouth. A Rosary will be recited at 6:30 p.m. in the funeral home.
Mass of Christian Burial will be held at Holy Family Catholic Church, 56405 Mayflower Road, South Bend, IN on Saturday, July 26th at 10 a.m. with visitation one hour prior in the church. Fr. Glenn Kohrman, pastor and Fr. Daryl Rybicki pastor of Corpus Christi Parish will officiate.
Burial will follow in the St. Joseph Cemetery, Grant Road, South Bend.
Memorial gifts may be given to Holy Family Parish or The Poor Handmaids of Jesus Christ, P.O. Box 1, Donaldson, IN 46513