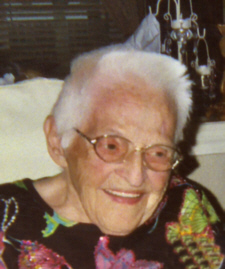 Margaret E. Knepper, 88, formerly of Garden Court West, died of natural causes in Pilgrim Manor Nursing Home at 6:25 a.m. on Sunday, June 17, 2007.
Margaret was born in Argos, Ind., on July 13, 1918. She was the daughter of Edgar and Grace Williams Methney. She attended Argos schools.
On July 20, 1935, Margaret and Howard A. Knepper were married. Howard died in August of 1977.
A homemaker in the early years of her marriage, she raised seven children. Later she was a general laborer at Bremen Wire.
An animal enthusiast, she loved dogs and cats. She was adept at crocheting and enjoyed working with sequins and beads.
She attended the Plymouth Baptist Church.
Margaret is survived by three daughters and two sons. Her daughters are Judy M. Dildine, Round Rock, Texas: Linda (Ed) Krecik, Knox, Ind.; and Sally O’Dell, Orrville, Ohio.
Her sons are Richard A. (Shurla) Knepper and Ronald E. Knepper, both of Plymouth, Ind.
A daughter-in-law, Barbara Knepper of Plymouth, also survives together with a sister, Mary Spitler, Argos.
Fourteen grandchildren and 23 great-grandchildren also survive.
Margaret was preceded in death by a son, James E. Knepper and a daughter, Mary Jane Knepper, son – in – law,.John O’Dell, and daughter -in-law, Susan I. Knepper.
To celebrate her life, a memorial service for Margaret will be held at 3 p.m. on Wednesday, June 20, 2007, in the Johnson-Danielson Funeral Home, 1100 N. Michigan Street, Plymouth. There will be an hour of calling prior to services.
Burial will be in New Oakhill Cemetery, Plymouth.
Memorial gifts in Margaret’s memory may be made to Marshall Co. Hospice or the Marshall Co. Humane Society.