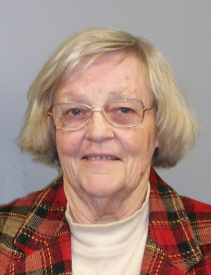 Margaret Louise Bates, age 78, passed away on February 8, 2014 at 3:30pm at Miller’s Merry Manor in Plymouth after a 3 ½ year battle with cancer.
Born in Bourbon, Indiana on February 1, 1936 Margaret was the oldest daughter of Chester and Thelma (Roahrig) Hall.
Margaret graduated with the Bourbon High School Class of 1954. After graduation Margaret completed the X-ray Technician Course at Elkhart University of IN and worked in the X-ray department of the Huntington County Hospital of Indiana.
Margaret married James Allen Bates on April 8, 1956 at the Bourbon First United Methodist Church. Their union of almost 58 years blessed the family tree with two sons and two daughters, five grandchildren and 2 great grandchildren.
She was a lifelong resident of Bourbon and Tippecanoe townships of Marshall County, IN.
As the oldest child in her family growing up, Margaret would help her dad with chores and drove the hay baler in the neighborhood in her younger years. She was raised up with horses and performed and showed at the Bourbon Fair, the Silver Dollar Saddle Club of Bourbon and was a member of the Diamond X Horse Campground of Peru, IN.
Margaret took great pride being a devoted mother and wife. From her kitchen command post she enjoyed cooking and baking for her family and friends who stopped by. Margaret was noted to have one of her many aprons on while doing her domestic chores. Each year she would put out a huge garden and enjoyed sharing and preserving her bountiful harvest. Margaret delighted in watching her cows and calves. She was also an accomplished seamstress. Margaret enjoyed genealogy; she created the Bourbon High School Chronicle 100th Alumni Celebration book. A woman of faith, Margaret served her church as a Sunday school nursery teacher when her children were toddlers. As a member of 4-H and the County 4-H Health Queen in her teen years Margaret devoted her volunteer time as a 4-H leader during her children’s youth and served on the Marshall County 4-H Council. Through her years Margaret worked clerical for Bremen Corl Corporation, Romine Sunoco, Ball Auction and Metheny Elevator of Bourbon. She was Tippecanoe Township Trustee Clerk and was involved with the Bourbon Antique Tractor and Engine Show.
As the matriarch of the Bates family, Margaret was always there to share her love, wisdom and give advice to her children and grandchildren. She relished in their joy when babysitting and attending their 4-Hand athletic events, graduations and weddings.
Margaret is lovingly remembered by her adoring husband James , children; James (Jim) Bates Jr. of Bourbon, Jo Bates of Tippecanoe, Judith Weissert and husband Marc of Bourbon, Jon Bates and wife Kim of Bourbon. Five grandchildren; Jennifer Backus and husband Wes of Akron, Jeff Bates and wife Alisha of Warsaw, Kirk Bates and wife Laura of Bremen, Megan Semonis and husband Daniel of Argos and Stacy Robinson and husband Mike of Etna Green. Two great grandsons; Landon Bates and Owen Backus. And Max her loyal dog companion.
Margaret also leaves her two brothers Chet Hall and spouse Jane, Steve Hall and spouse Rose Ann, and a sister Janet Trowbridge all of Bourbon.Also a brother in law Jay Bates and spouse Sue, a Sister in law Barb Faulkner and spouse Don all of Bourbon and two aunts Marilee (Roahrig) Koontz and spouse Gene of Fort Wayne and Wilma (Hall) Hepler of Bourbon.
A private family celebration of the life of Margaret Louise Bates will be at Johnson and Danielson Funeral Home, Plymouth, Indiana. Graveside services will be held at 2:00 p.m. on Tuesday, February 11, 2014 in the Pleasant Hill Cemetery of Bourbon, Indiana.
Memorials may be made to the Community Hospital of Bremen 1020 High Road, Bremen, IN 46506 and the Plymouth Cancer Institute, 1915 Lake Ave., Plymouth, IN 46563.