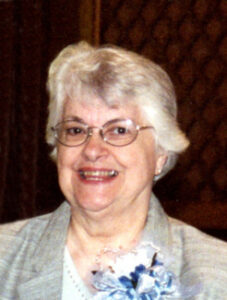 Margaret Ellen “Peg” Pifer Vancza, 82, of Plymouth passed away at 6:40 a.m. Saturday, November 22nd in Miller’s Merry Manor.
Peg was the daughter of Harold Charles and Hattie Ruth (Holm) Pifer. She was born in Plymouth on August 21, 1932. She was a lifelong Plymouth resident and graduated from Plymouth’s Lincoln High School in 1950. There she was active in G.A.A., Rainbow Girls and held office in Sunshine.
Peg was a lifetime active member of the First United Church of Christ, where she taught Sunday School, directed the Junior Choir with her children and then directed the choir. While raising her children, she was a member of the Plymouth Swim Club and supported their many activities. She also worked on the Election Board and was a precinct volunteer. She was a caregiver to many and was a great role model to her children and many others who knew her.
She worked as a legal secretary for the Stevens Law Firm, Roy Burbrink, and Lukenbill & Lukenbill. She retired in 1995 and enjoyed time with family and friends.
Peg is survived by her three children; Stephen Vancza of Atlanta, Gregory & Shelley (Chaney) Vancza of Louisville, KY and Anna (Vancza) & Bruce Corbett of Plymouth. Five grandchildren include: Michael Vancza, K. Casie & Joe Paradiso, Brent & Beth Corbett, Sydne Roberts and Kylye Roberts along with three great-grandchildren: Neva Paradiso, Miles Paradiso and Wilson Corbett. One sister and brother-in-law Patricia (Pifer) and Jack Carpenter of Argos and several nieces, nephews and cousins also survive.
She was preceded in death by her parents and a sister Mary Sue Pifer.
Family and friends will gather at the Johnson-Danielson Funeral Home 1100 N. Michigan St., Plymouth on Monday, November 24th from 4-7 p.m. to celebrate her life. Services will be held on Tuesday, November 25th at 11 a.m. in the funeral home with Rev. AnnMarie Kneebone, pastor of the First United Church of Christ officiating.
Burial will follow in the New Oakhill Cemetery, Plymouth.
Memorial gifts may be made to the First United Church of Christ, 312 N. Center St., Plymouth, IN 46563 or the Center for Hospice Care, 112 S. Center St., Plymouth, IN 46563.