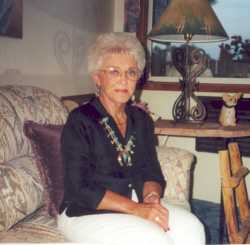 Margaret “Peggy” Davis, 81, A Plymouth resident since 1986, coming from Fort Meyers, Fla., died of natural causes on Monday, May 28, 2007, at the home of her daughter in Rochester, Ind.
She previously had lived in Argos and North Liberty.
Peggy was born in North Liberty, Ind., the daughter of Walter A. and Erma McKean Shinn, on April 24, 1926. She graduated from North Liberty High School with the class of 1944 and attended Manchester College.
On March 8, 1946, Peggy and Carl D. Davis were married in West Lafayette, Ind. Carl died in 1993.
Peggy worked for five years from 1970 to 1975 at the Coast to Coast Store in Argos, Indiana. Peggy spent most of her time helping out on the farm and raising the children.
She enjoyed working and caring for her beautiful flower gardens. Peggy was a good bowler and reveled for good competition. Peggy is survived by three daughters and two sons. They are Darlene (Michael) Cowger, Rochester, Ind.: Cheri Riese, Elkhart, Ind, and Barb Davis, North Liberty, Ind. Her sons are Cary (Shirley) Davis, Wellington, Ky, and Larry (Lois) Davis, Plymouth, Ind.
She is also survived by 26 Grandchildren, 23 Great Grandchildren and 7 Great – Great Grandchildren.
One brother, Mel Shinn, LaPorte, Ind., also survives.
She was preceded in death by her husband, a son, Darwin Carl Davis, two grandsons, Danny Lee Davis and Michael Ernest Cowger, Jr. and two brothers: Donald and Everett Shinn.
Friends are invited to share memories of Peggy’s life with her family on Friday, June 1, 2007, 4 to 8 p.m., at the Johnson-Danielson Funeral Home, 1100 N. Michigan St., Plymouth.
Funeral services for Peggy with the Rev. Robert Vale, pastor of the Argos United Methodist Church, officiating will be held at 10 a.m. on Saturday, June 2, 2007, at the funeral home.
Burial will be in the New Oakhill Cemetery, Plymouth, Ind.
Memorial gifts in Peggy’s memory may be given to Hope Hospice of Fulton County.