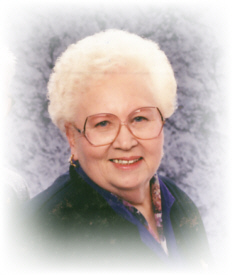 Services for Margie I. Barger who died following a brief illness in the care of Memorial Hospital South Bend, will be held at 10 A.M. Thursday, August 31st in the Johnson-Danielson Funeral Home, 1100 N. Michigan St. Plymouth where friends may call on Wednesday, August 30th from 5 – 8 P.M. Daughter-in-law, Cindy Barger will conduct the services with burial following in the New Oakhill Cemetery, Plymouth. Preferred are memorial gifts to the American Diabetes Association.
Margie who had a zest for life and appreciation for good humor was born the daughter of Luther Walter and Beatrice (Simms) Tucker on May 2, 1928 in Harrisburg, Illinois. She would receive her schooling there and graduate Harrisburg High with the Class of 1946.
On April 18, 1947 in Morgantown, Kentucky, Margie married Richard Barger. After starting a family, they moved to South Bend and on to Plymouth in 1968 and now resided at 16394 6th Road. This union would span 50 memorable years until his death on June 22, 1997
Margie was foremost a devoted homemaker and mother who also worked as an office supervisor for Kemper Life Insurance Co. for over 35 years retiring from the Indianapolis office in 1994.
She was not one to stay at home when she could be doing things with her family – like traveling off to Disney World and Connecticut or simply camping and scouting out a good garage sale for antiques. Margie was known as Maw Maw to her grandchildren who remember her cooking, doing crafts, crochet work, reading and listening to country music. For many years she was active in the Order of the Eastern Star and volunteered at the Marshall County Historical Museum.
Margie lives on in her four children, seven grandchildren and 10 great grandchildren. They include two daughters; Susan Y. Barger of Stanford, Conn., Pamela J. Rospopo of Argos and her fiancé Michael Collmer, two sons; Steve A. Barger and his fiancé Cindy Williams of Plymouth and R. Michael and his wife Cindy of Buford, Ohio. Her grandchildren are: Angie, Shawn, Tammy, Rich, Amanda, Justin and Chantelle.
Preceding in death were her parents, spouse, infant daughter Deborah Ann, brothers George and Ferrell Tucker and son-in-law James Rospopo.