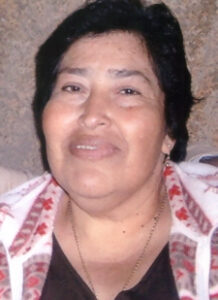 Maria Carmen Arroyo Rodriguez, 52, of 106 S. 5th Street, Plymouth, Indiana, died of natural causes at her residence, at 4:55 a.m. on Wednesday, June 27, 2007.
Maria was born the daughter of Emelio Arroyo and Maria Rodriguez in Santiago Capitiro Municipio de Jaral del Progresso, Guanjuato, Mexico.
She and Jose Jimenez were married there on July 7, 1977. They moved to Plymouth in 2003, where she was a member of St. Michael’s Roman Catholic Church.
A homemaker, she was a loving mother and grandmother.
Maria is survived by four sons: Julio (Christina) Jimenez, Javier (Veronica) Jimenez: Manuel (Rebecca) Jimenez and Maurico Jimenez, all of Plymouth, Indiana.
A granddaughter, Guadalupe Jimenez and three grandsons, Sebastian, Johnny and Christopher Jimenez, also survive.
Two brothers, Refugo and Jesus Arroyo, of Mexico and two sisters, Raquel, Akron, Indiana and Rosalina Chavez, Mexico, survive as well.
She was preceded in death by a sister, Maria Arroyo.
Friends are invited to celebrate Maria’s life with her family on Friday morning, June 29, 2007, from 9:30 a.m. to 11:30 a.m. at St. Michael’s Roman Catholic Church, 615 N. Center St., Plymouth, Indiana.
A Mass of Christian Burial will begin after the visitation at 11:30 a.m.
Burial will follow in the St. Michael Catholic Cemetery.