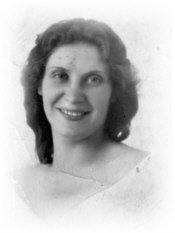 Maria Sickmiller, 84, died of natural causes, at 5:49 p.m. Friday, June 13, 2003 at the Lakeland Rehabilitation and Healthcare Center of Milford, Indiana where she has resided over the past ten years. Maria was a former resident of 11th Road Plymouth and the Marshall County area since 1946.
Born in Naples, Italy on September 21, 1918, Maria is the daughter of Angelo and Concetta Espanita Costintino. She received her education in Italy and continued her education after immigrating to the United States and received her citizenship on December 6, 1954, for which she was very proud.
At Naples, in July of 1946, Maria married Wilbur W. Sickmiller. He preceded her in death on May 11, 1990.
Maria was a true homemaker and enjoyed caring for her children and making over her grandchildren. Gardening, nature walks, cooking and knitting were some of her interests. She once loved to sing and dance having performed on stage in Italy.
She was a former employee of Easy Heat in Lakeville, Ind., retiring after 11 years of service in 1983. Maria was a Roman Catholic and had attended St. Michael Church, Plymouth.
Maria is survived by three daughters; Connie Sue Davis of Warsaw, Carol Ann & Leroy Hattery and Mary L. Sickmiller all of Tippecanoe, Ind. and two sons; Sandro & Ruth E. Sickmiller of Tippecanoe and Roger A. & Patsy Sickmiller of Rochester, Ind.
Ten grandchildren and eleven great grandchildren also survive along with a sister Rita Costintino of Italy and numerous nieces and nephews.
Proceeding in death were her parents, three brothers and three sisters along with a great grandson, Jesse Sickmiller.
Visitation with her family will be held on Monday, June 16, 2003 from 6 – 8 p.m. in the Johnson-Danielson Funeral Home, 1100 N. Michigan St. Plymouth, where a rosary will be said following visitation at 8 p.m.
Services will be held at 10 a.m. on Tuesday, June 17th in the funeral home, the Rev. Charles Krieg will officiate. Burial will follow in the Maple Grove Cemetery, Argos.
Memorial gifts in Maria’s memory may be given to the Alzheimer’s Association, c/o the funeral home.