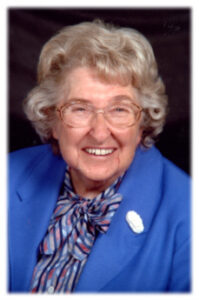 Marian A. Calvert, a Christian woman with a never ending smile, passed away at 12:22 a.m. on Saturday December 6, 2014 at Pilgrim Manor, Plymouth she was 96 years old. A longtime resident of Marshall County, Marian formerly resided on Vine Street in Tyner.
Born in Detroit, Michigan on June 10, 1918, Marian was the daughter of Leonard and Bessie L. Myers. She graduated high school and attended two years of business school in Detroit.
In October of 1950, Marian wed James Matthews in Detroit. The couple would then move to Plymouth. James would precede her in death.
Marian worked as an office purchasing assistant for Champion Homes in Bremen, and then as a sales clerk for Bosworth’s. She would retire in 1989.
On April 16, 1977, in the Trinity United Methodist Church, the Rev. William Nangle united Marian and Eugene B. “Gene” Calvert in marriage. He would precede her in death on January 9, 2001.
She and Gene spent many hours beside a river bank enjoying the company of singing birds and listening to the sound of running water. They appreciated nature, and floating down river in their flat-bottomed boat gave them much pleasure together. Together they attended the Plymouth Wesleyan Church and more recently Marian worshiped at the Tyner United Methodist Church.
Marian was gifted at crafting, painting landscapes and nature scenes as well as cross-stitch. She also enjoyed working and framing jigsaw puzzles.
She is survived and will be greatly missed by her children: Judith C. and DeVere Abair of Plymouth, Brenda J. Matthews and Lenny A. Matthews, all of Breverton, Ore., along with her two step- sons: Larry L. and Anna Calvert of Charlo, Montana and Phillip “Phil” R. and Rose Calvert, Muncie, Ind. Also surviving are 10 grandchildren, 21 great-grandchildren and 16 great-great grandchildren.
She was preceded in death by her husbands, James and Gene, and her sister, Shirley A. Cornwall.
Visitation will be held on Wednesday, December 10th from 5 – 7 p.m. in the Johnson-Danielson Funeral Home, 1100 N. Michigan St., Plymouth. Services will begin at 7 p.m. in the funeral home with Rev. Bridget Hoch, Chaplain for the Center for Hospice Care officiating. Burial will be in the Tyner Cemetery.
Memorial contributions can be made to the Center for Hospice Care 112 S. Center St., Plymouth, IN 46563 or Pilgrim Manor 222 Parkview Dr., Plymouth, IN 46563.