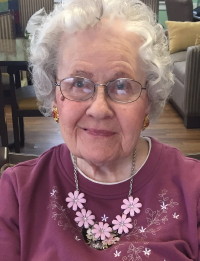 Marian L. Tharp, 94, peacefully passed away on Friday, January 17, 2019 at Miller’s Merry Manor in Warsaw, Indiana.
Born February 9, 1925 in Bremen, Indiana, Marian was the daughter of Edward Francis and Ethel May (Dodd) Walterhouse. She graduated from Bremen High School with the class of 1942. In 1946 she received her diploma from the St. Joseph Hospital School of Nursing in South Bend, Indiana. That same year, she began working as an RN at Marshall County Parkview Hospital in Plymouth.
On February 1, 1948 in Plymouth, Marian married Max Eugene Tharp, who was a funeral director at Johnson & Son Funeral Home, now the Johnson-Danielson Funeral Home. In 1953, they moved to 120 Elliott Avenue in Plymouth and resided there for 63 years, while raising their children: Jack, Jill and James.
She was employed at Bremen Hospital for eight years, but returned to Parkview in 1960. She was appointed Obstetrics Supervisor at Parkview in 1962. She would work at Parkview, which soon became St. Joseph Regional Medical Center, for 26 years until her full-time retirement in 1988. Marian then decided to work part-time for the hospital, for a total service to her community of 47years as a nurse.
In 1998, Marian and Max celebrated their 50th wedding anniversary. A celebration of family, memories and love.
Marian was well-known by hundreds of families in Marshall County from being there at their births. She was a long time member of Trinity United Methodist Church in Plymouth; a choir member, a member of Bible Study and Builders Class. She enjoyed her Bridge Club. Max and she spent years traveling with best friends, Les and Sue Read and Neil and Dorothy Chase. And man oh man, was Marian an excellent cook.
Max would pass away on August 16, 2007. Marian would continue to live in their home until she became a resident of Miller’s Merry Manor in Warsaw in 2016.
She is survived by her children: Jack & Pam Tharp pf Noblesville, IN, Jill Tharp of Indianapolis, IN and James & Karen Tharp of Warsaw; 5 grandchildren: Amber (Doug) Doster, Zachary Tharp, Rachel (Nolan) Jones, Leah (Craig) Downey and Lorian Tharp; 6 great-grandchildren: Anna, Aaron, Allison and Aubrey Jones and Jack and Ryan Doster; her sister, Ruth Fox of Wakarusa and 24 nieces and nephews.
Marian was preceded in death by her husband, Max, parents and 7 siblings.
Funeral services will be held on Wednesday, January 22, 2020 at 1 p.m. at Trinity United Methodist Church. 425 S. Michigan Street, Plymouth with Life Celebrant James Smart officiating. Visitation will be held prior from 11-1 p.m.
Burial will be in the New Oak Hill Cemetery, Plymouth.
In lieu of flowers, memorial contributions can be made to Trinity United Methodist Church. 425 S. Michigan Street, Plymouth, IN 46563.