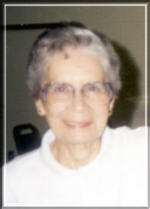 Marian M. Cannan, 83, died of natural causes in Miller’s Merry Manor, 600 Oakhill Ave., Plymouth, at 2:25 a.m. on Tuesday, January 14, 2003. With a warm hand and a smile to light up any room or a gloomy day, Marian will be remembered as a good friend and a devoted mother and grandmother. Born in St. Joseph County on August 2, 1919, Marian was the daughter of Lewis and Lavange Halt Schroeder. She graduated from LaPaz High School in 1937. On October 11, 1957, in Marshall County, Marian and Charles Cannan were married. Charles died on January 28, 1999. In earlier days, Marian, a very hard worker, had worked for Schlosser Brothers Dairy (later called Hawthorn Melody) and in Bosworth’s Department Store as a leather goods buyer. In the 1970s, she and her husband, Charles, operated the Alibi Restaurant. Very active in the Plymouth Eastern Star organization, she was twice named as Worthy Matron. Marian is survived by two sons and their families. They are David (Carol) Schroeder, Mishawaka, and Harvey (Suzanne) Albert, Largo, Florida. Three granddaughters: Julie Weidner, and Jan Salazar, both of Plymouth, and Savannah Boege, Tallahassee, Fla., also survive. Grandson, Tyler Albert and another grandson of Largo, Fla., survive as well, together with Shirley Alberts, a sister, Plymouth, Ind., and three brothers; Dan and Gene Schroeder, both of Wisconsin and Harlan Schroeder, Plymouth. Several nieces and nephews and four great-grandchildren also survive. They are Erin and Jared Weidner and Derek and Britni Salazar. Marian was preceded in death by her parents, her husband and three brothers: Dick, John and Earl Schroeder. Friends may call at the Johnson-Danielson Funeral Home, 1100 N. Michigan St., Plymouth, on Thursday, January 16, 2003, from 4 to 7 p.m. An Eastern Star memorial service will be held at 7 p.m. The Rev. Paul McBride, will officiate at Marian’s funeral services on Friday, January 17, 2003, in the funeral home at 11 a.m. Interment will be in Morris Park Cemetery, LaPaz, Indiana. Memorial gifts in Marian’s memory may be made to Marshall Co. Hospice.