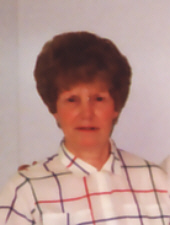 Marianna Sager, a resident at Miller’s Merry Manor for the past 4 years, died, following an extended illness, at 6:41 a.m. on Sunday, May 4, 2008. She was one day shy of her 78th birthday.
Marianna was born on May 5, 1930, in Salamonia, a town in Jay County, Indiana, the daughter of Lester Leo and Gleda Faye (Stone) Bickel.
She was valedictorian of her 1948 graduating class of Portland (Ind.) High School.
On October 2, 1948, at home in Jay County, Marianna and William Earl Sager, Jr. were married. William died on October 26, 1999.
Marianna first worked at Montgomery Ward and then was payroll clerk at Teledyne Portland Forge for 31 years, retiring in 1995.
She was adept at crafts, knitting and sewing. She played euchre and enjoyed boat trips. Activities with her children and grandchildren were of her favorite things to do.
Marianna was a member of the Salamonia United Church of Christ. She also was a member of Beta Sigma Phi in Portland and a former member of the Ladies Auxiliary of the Portland American Legion, the Portland Lioness Club and the Elks Lodge.
Marianna is survived by a daughter: Cheryl A. (Geoffrey) Scarberry, Plymouth, and their son, Adam: a son, Edward L. (Madonna) Sager, Cleveland, Ga., and their children, Roberta, Brian, Jon and Ginifer and by two foster daughters: Vivian “Beeb” Liverman, Lakewood, Colo., with children, Brett and Josh and Joyce (Steve) Burt, Berne, Ind., and sons, Daniel and Chad.
Fourteen great-grandchildren and a brother-in-law, Gene Duke of Jay County, survive as well.
Marianna was preceded in death by her parents, husband and a sister, Ruth Evelyn Duke.
Friends are invited to share memories and celebrate the life of Marianna Sager with her family at the Johnson-Danielson Funeral Home, 1100 N. Michigan St., Plymouth, on Wednesday, May 7, 2008, from 5 to 7 p.m.
Funeral services for Marianna will be held on Thursday at 1 p.m. in the Baird-Freeman Funeral Home, 221 N. Meridian St., Portland, Ind., with visitation two hours prior to services.
Burial will be in the Green Park Cemetery, Portland, Ind.
Memorial gifts in Marianna’s memory may be made to the National Parkinson Foundation or the Center for Hospice and Palliative Care, Inc. (Marshall County), 112 S. Center St., Plymouth, Indiana 46563.