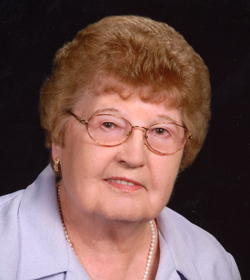 Marie A. (Hite) Masterson, 100, of Plymouth, passed away on Wednesday, April 18, 2018 surrounded by her loving family.
Marie was born June 16, 1917 in Plymouth, Indiana, to the late Samuel and Lela (Everly) Hite. When she was six years old, her mother died, and she and two of her siblings were raised by her grandparents, Jacob and Clara Belle Everly. To the day she died she was forever grateful for her loving and nurturing grandparents and she passes on that same love and work ethic to her children and grandchildren.
Marie married Delbert L. Masterson on November 30, 1935. Delbert passed away on April 29, 1975 and she resided with her son, Jim, for the past forty-three years.
On May 12, 1982, Marie helped her son, Jim start a real estate brokerage business. (Masterson & Assoc.) and has worked at the office from its inception to the present. She will be greatly missed by the staff and customers of the firm.
Marie attended the Blissville Church of the Brethren for over twenty-five years and presently was attending the Plymouth Wesleyan Church for the last twenty years. She was a Berean Sunday school class member.
Marie has seven children; Mable Kauffman, Mary (Ron) Atkins, Donald Masterson, Geraldine (Gerald) Abair, Fred Masterson, Richard (Susan Janek) Masterson and Jim Masterson. Our family has been Blessed to have the most wonderful Christian Mother and the best friend a son or daughter could ever have. Our family will continue to share the love and compassion that she has given to each of us.
The Masterson family would like to thank Dr. Byron Holm for the wonderful medical and spiritual care he gave to our Mother.
She was preceded in death by her parents, husband, son; Jerry Lee Masterson, brothers; Everett, Harold, Lewis and Charles Hite, sisters; Elnora Hilliard, Doris McFarland and Sharon Bope, her daughters-in-law; Sharon Masterson and Rita Masterson, grandson; Tony Michael Himes, and grand-daughter; Jeanette Masterson.
Visitation will be from 12:30-2:30 PM Saturday, April 21, 2018 in the Plymouth Wesleyan Church, 11203 South Michigan Street, Plymouth, Indiana 46563. Funeral services will follow at 2:30 PM with Pastor Ed Friberg officiating. Burial will follow in the Oak Hill Cemetery.
Memorial contributions can be made to the Boys & Girls Club of Marshall County, 314 East Jefferson Street, Plymouth, Indiana 46563.