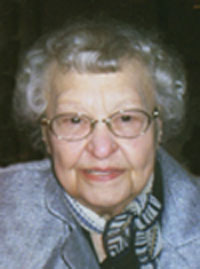 Marie E. Baker, 95 died on Sunday, January 21, 2018 at Brookdale Senior Living in Hoffman Estates, IL. She was a long time resident of Plymouth before relocating to Sun City in Huntley, IL with her husband Dorland in 2005.
Born in Renville, MN on April 19, 1922, Marie was the daughter of Peter and Elizabeth Balogh. She relocated with her family to Plymouth after the Second World War and on January 31, 1948, Marie was married to Dorland at St. Clements Catholic Church in Chicago.
Marie was preceded in death by Dorland on September 6, 2007. She leaves her loving family including her two sons: David Baker (and Davidâ€™s wife Terry) of Algonquin, IL and Mike Baker of Park City, UT along with three granddaughters and one grandson (Shannon, Katie, Alison and Josh) and her sister Irene. She was also preceded in death by her five other siblings Elizabeth, Katherine, Peter, Marvin and Anne.
Mass of Christian Burial will be held on Wednesday, January 24, 2018 at 11 a.m. EST at St. Michaelâ€™s Catholic Church, 613 N. Center St. Plymouth, IN. Friends are welcome from 10:30 a.m. until the start of mass.
Burial will be in the New Oak Hill Cemetery, Plymouth.
Memorial contributions can be made to Alzheimerâ€™s & Dementia Services of Northern Indiana, 922 E. Colfax Avenue, South Bend, IN 46614.