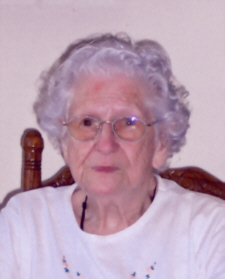 Marie E. Hatfield, 94, a Plymouth resident for all of her life, died at 9:45 p.m. on Friday, August 29, 2008, in Miller’s Merry Manor, Plymouth.
The daughter of Ira and Dottie Eaglebarger Berkeypile, Marie was born in Elkhart, Ind. on June 13, 1914. She attended Bourbon schools for the first six years and Plymouth schools for the remaining six years, graduating with the class of 1933.
On June 29, 1935, in Plymouth, Marie and Russell D. Hatfield were married. Russell died on June 13, 1990.
A homemaker, Marie loved to draw and paint with water colors. She enjoyed cooking and was adept at all kinds of handiwork, both as a student and teacher: crocheting, knitting, tatting, doing cross stitch and paper cutting.
She was a member of the Tippecanoe Primitive Baptist Church for 68 years.
Marie is survived by a daughter and four sons. They are: Eileen (John) Burgess, Plymouth: Lowell Hatfield, Bowling Green, Ky.: Delmar (Karen) Hatfield, Elkhart, Ind.: Harvey (Karin) Hatfield, South Bend and Timothy (Deborah) Hatfield, Sun Prairie, Wisc.
Nineteen grandchildren and thirty great-grandchildren survive as well.
Marie was preceded in death by her parents, her husband, Russell, a son, David, in 1958 and two brothers, Arnold and Clayton Berkeypile.
Friends and family are invited to celebrate the life of Marie Hatfield at the Johnson-Danielson Funeral Home, 1100 N. Michigan St., Plymouth, from 4 to 8 p.m. on Tuesday, September 2, 2008 and Wednesday, September 3, 2008 for one hour prior to the services at the Church.
Funeral services for Marie will be held on Wednesday, September 3, 2008, at 10:00 a.m., in the Tippecanoe Primitive Baptist Church at the corner of Gumwood and 10th Rd. Elder Tom Sarber will officiate.
Burial will be in New Oakhill Cemetery, Plymouth, with a luncheon following at the Church.
Memorial contributions in Marie’s memory may be made to the Lion’s Eye Bank, the Center for Hospice and Palliative Care or to a Charity of the Donor’s Choice.