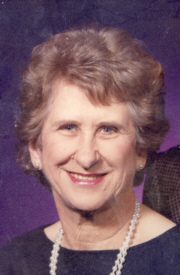 Marie P. Wagner, 94, formerly of LaPorte, passed away Wednesday morning in Miller’s Merry Manor, Plymouth, where she has resided this past year.
Marie was born the daughter of Stanley and Tilly (Kawecka) Pastuszak in Detroit, Michigan on July 18, 1914.
On March 17, 1935 in Chicago, she married Phillip B. Wagner who preceded her in death. Marie was a former production worker with Whirlpool and Kaiser Aluminum. She and her spouse were active in the LaPorte Boy Scout Troop 39, they enjoyed travel throughout the country in their RV, the sites of England and spending over twenty winters in the Ocala and Cocoa areas of Florida.
Surviving are two sons, a daughter and families. They are: Dan P. Wagner and Corinne of Glenwood, IL, and daughter Erica Wagner; Robert L. (Marcy Eckhoff) Wagner of Plymouth and children Ted Wagner, Tonya Smith, Lynn Liberati, Bryan Eckhoff and Tim Eckhoff; and Bonnie E. Rock of Plymouth survive along with ten great-grandchildren and two great-great grandchildren all of whom were so very important in her life.
A brother Matthew Pastuszak of West Chicago and a sister Bernice Nipes of Edwardsburg, Mich. also survive along with many nieces and nephews.
Preceding in death were three sisters; Helen O’krey, Stella Pastuszak and Sophia Pastuszak.
Visitation will be held on Friday from 4 – 8 p.m. EST in the Johnson-Danielson Funeral Home, 1100 N. Michigan St. Plymouth where a Rosary will be said at 7:30 p.m.
A Mass of Christian Burial will take place at 10 a.m. EST on Saturday in the St. Michael Church, 611 N. Center St. Plymouth. Graveside services will be held at 1 p.m. CST in the Patton Cemetery, LaPorte, Indiana.
Preferred memorial gifts may be made to The Hemminger House, P. O. Box 4 Plymouth, Ind. 46563, Boy Scouts of America or Center For Hospice & Palliative Care.