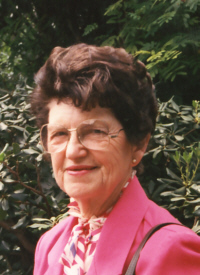 Marie R. Summers, 86 of Walkerton and a lifetime Marshall County resident, died peacefully of natural causes at 1:53 p.m. at St. Joseph Regional Medical Center, Plymouth Campus.
Marie was born on September 12, 1919 to Oran and Estella Pippenger Ruff in her parent’s home in Plymouth, Indiana
She graduated with the class of 1937 as the class valedictorian from West High School. She then attended Manchester College.
On December 23, 1950 in Plymouth she married Gene H. Summers who preceded her in death on April 11, 1977.
Marie worked as a secretary for the Indiana Motor Bus Co., Plymouth. She then worked as a bookkeeper for Miller’s Merry Manor, Plymouth before retiring in 1985.
Marie was first dedicated to living a Christian life, she shared her God given talent as a skilled musician with her church and others. Marie always made time for her family, friends and even strangers. She was an 82 year member of the Blissville Church of the Brethren, where she served as the pianist and various other positions, Marie played piano at many many funerals, weddings, special programs for Eastern Star and accompaniment for the Marshall County Men of Music. She was also an active member of the Purdue Extension – Marshall Co. Chorus where she once served as the director and on June 9, 2005, she was the recipient of the Patty Hunt Service award. Active for many years in the Tyner Rebecca Lodge #865, Marie held several leadership roles within the organization, including past Noble Grand and served on several occasions as musician of the Rebecca Assembly of Indiana.
Marie was also very involved in the Ladies of the Eastern Star Kilwinning Chapter #23 with distinction of being a Past Worthy Matron. She was a past President and musician of the Ladies Auxiliary – Patriarch Militants of Indiana.
Marie is survived by her daughter, Mary Ann Summers of Chicago, Ill., two sister-in-laws, Joyce Dolph of Plymouth and Vonna (Don) Rettinger of Bourbon, Ind., She is also survived by several nieces and nephews, cousins and friends.
She was preceded in death by her parents, her husband and a brother, Elson E. Ruff. Friends are invited to celebrate the life of Marie Summers on Wednesday May 24, 2006 from 4 to 8 pm. in the Johnson-Danielson Funeral Home, 1100 N. Michigan St., Plymouth and one hour prior to services on Thursday at the church. A Rebecca Lodge memorial service will begin at 7:00 pm Wed. in the funeral home followed by the Marshall County Chorus and conclude with a remembrance by members of the Order of Eastern Star. Funeral services for Marie will be held at 1:00 pm on Thursday May 25, 2006 at the Blissville Church of the Brethren, 6250 Spruce Trail Plymouth. The Rev. Jimmy Baker, pastor of the church along with the Rev. Paul Nye will officiate.
Burial will follow in the Tyner Cemetery, Tyner, Indiana.
Gifts in memory of Marie may be made to The Blissville Church of the Brethren or to the charity of the donor’s choice.