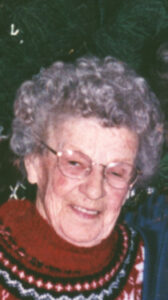 Marie Schanen, 96 of Port Washington, WI passed away peacefully on the evening of Monday, December 11th, at the home of her daughter and son-in-law; Dorothy and Dalton Fehrer.
She was born to Martin J. Ryer and Agnes Sedler Ryer and lived her whole life in Port Washington. On December 28th 1928, she married Clarence Schanen, at St. Mary’s Catholic Church. They had two children; Robert Schanen and Dorothy (Schanen) Fehrer.
In more recent years, Marie cooked for the children at St. Mary’s School. This is a job she truly loved. Marie had a lust for life, her home and yard. She was an extremely fun loving woman who cared deeply for people in need.
Marie was preceded in death by her husband, Clarence in 1972, her son Robert in 1992, her grandson Dalton “Skip” Fehrer in 1997, and her daughter Dorothy on the morning of Monday, December 11th, 2006. Also preceding her were her seven brothers: Joe, Frank “Frickie”, Ray, Louis, Marty, Ralph, Alvin “Beanie” and a sister, Louise.
Surviving Marie is her son-in-law Dalt, a daughter-in-law, Cecilia Schanen, her grandchildren: Sherry (Fehrer) Watkins and husband Gary, Mary Pat (Fehrer) Kubina and husband Jay, Dave Fehrer and wife Carol, Kris (Fehrer) Pedler and husband Doug, Diane (Schanen) Race, Peggy (Schanen) Foltz and husband Larry and Daniel Schanen. In addition there are 17 great-grandchildren and 5 great-great grandchildren.
Marie has two surviving sisters-in-law: Jeanette Ryer and Lois Schanen, many nieces, nephews and close friends.
Join us in sharing memories of Marie’s wonderful life from 5 – 7 p.m. (C.S.T.), Monday, December 18, 2006 in the Eernisse Funeral Home, 1600 Grand Ave., Port Washington, Wis. A Mass of Christian Burial will follow visitation at 7:30 p.m. (C.S.T.) in St. Mary’s Catholic Church, Port Washington. Burial will occur on Tuesday December 19th in the St. Mary’s Cemetery.
In lieu of flowers, memorial gifts may be made to the Marshall County Center for Hospice and Palliative Care, 112 S. Center St., Plymouth, IN 46563 or St. Mary’s School in Port Washington.