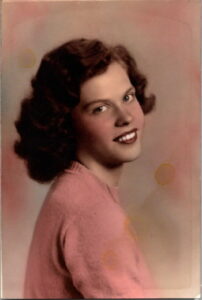 Born on July 18, 1931 in Harvey, Illinois she was the daughter of Carl and Bertha (McQueen) Small.

While in eighth grade her family moved from Illinois and settled in Plymouth. She would attend West High School graduating with the class of 1949.

Her first job was at Slusher Brothers where she met John Slabaugh, they were united in marriage on January 20, 1951. They were later divorced, and in 1974 she would marry Charles H. Emmons, he preceded her in death in February of 1999. Marilyn also worked for Wagners, Wallpapers Etc. later on in life a self-employed decorator before retiring in 2001 at the age of 70.

Marilyn was involved with the Moose Lodge, singing in the choir at 1st United Church of Christ and involved in camp fire. She liked to sew, working in her garden and reading. She loved her family, getting together for every holiday was a must as well as taking the grandchildren on picnics in the summer.

Marilyn is preceded in death by her parents, son: John Richard, sister Bobbie and her granddaughter April.

Visitation will be held on Monday, August 16, 2021 from 12-1 p.m. at the Johnson-Danielson Funeral Home, 1100 N. Michigan Street, Plymouth. A funeral service will immediately follow with Reverend Charles Krieg officiating.